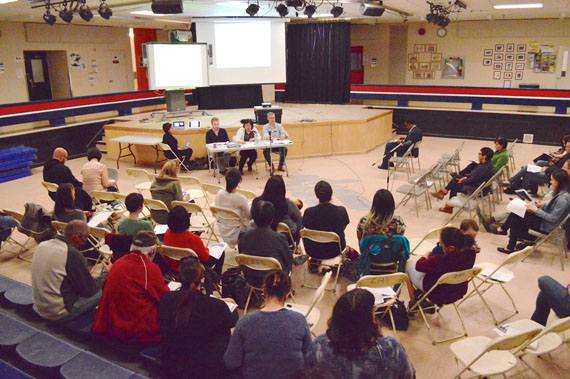 Nunavut government officials at a consultation gathering held June 20 in Iqaluit to talk about the GN’s proposed amendments to the Education Act. (PHOTO BY STEVE DUCHARME)

The Government of Nunavut’s proposed amendments to the Education Act has some Iqalungmiut fearful that the more centralized administration of education could wipe out regional accountability for schools across Nunavut.

That’s according to concerns raised at a consultation hearing that GN officials held at Inuksuk High School in Iqaluit June 20, when they opened the floor to comments from parents, teachers and district education authority members.

The meeting is part of a series of consultations held before the department drafts final versions of amendments that would be put before the legislative assembly for approval..

One of several proposed amendments by the Department of Education would shift responsibility for producing learning materials to educators and administrators from district education authorities.

Under those changes, the DEAs would perform an advocacy role, supplementing the department’s centralized curriculum with local content.

“The last major standardization effort was very damaging to Inuit, and that was the residential school system,” warned one attendee who favoured a regionally accountable education system.

“Advocacy is a lot different than having responsibility,” said the vice-chair of the Coalition of Nunavut DEAs, Doug Workman, who opposed shifting power from the DEAs.

“Having the DEA push an advocacy role is not acceptable,” Workman said, adding, “the community raises the child.”

“[It’s important] that parents have that connection [to education]. And that’s who I talk to, the parents… And that’s who we represent, and elect us, and we should retain that authority.”

MacDonald said a centralized curriculum is important to ensure the quality of resources that are available for teachers in Inuktitut.

“We’ve moved to a model where it’s much more rigorous to produce language texts,” he explained.

“It’s becoming more and more centralized because of the cost to produce those books… all of that work really has to be done in a centralized way.”

Right now, the GN provides annul funding contributions to DEAs to provide schools with learning resources, such as textbooks and other materials, a GN spokesperson said in an email to Nunatsiaq News.

“However, over the years the department has contributed to the design and delivery of learning resources to assist schools and increase consistency and equity across the system,” the email said,

Department officials promised to ground their curriculum on Inuit Qaujimajatuqanagit, or IQ, but the remark drew the ire of several in the crowd.

“The community DEAs must have a higher role and mandate in the communities,” said one woman in Inuktitut.

“I disagree with you using the word IQ,” she added, saying the department was only giving the concept “lip-service.”

“The Truth and Reconciliation Committee recommends that IQ be implemented properly,” she said to a round of applause from other attendees.

“We agree. It has to be something more than lip service,” said Lucas.

“We know we haven’t done a very good job of selling the teaching position to Nunavummiut,” he said.

One parent criticized the quality of care for students with learning disabilities, saying the department needs to prioritize the hiring of qualified specialists.

“We have children here who need to be assessed,” she said, adding that the lack of qualified specialists makes it difficult for students to receive individualized support from their schools.

MacDonald said the department is working towards creating more specialist positions that can be accessed by Nunavut schools.

Failing that, he said it might be necessary to outsource specialists from the Department of Health.

“We’re working on it, we really are, and I think that we’ll see some progress over the next few years and it will be a marked improvement over where we’ve been,” he said.

Lucas reminded the attendees “tonight is just to get ideas and consult.”

The second phase of consultations for the proposed amendments on Nunavut’s Education Act is scheduled for August.

From there, input from the consultations will be used to draft the final amendments to the Education Act, which will be presented to MLAs to discuss in Nunavut’s legislature.