“I want the minister to say, ‘This happened on my watch. I take full responsibility'” 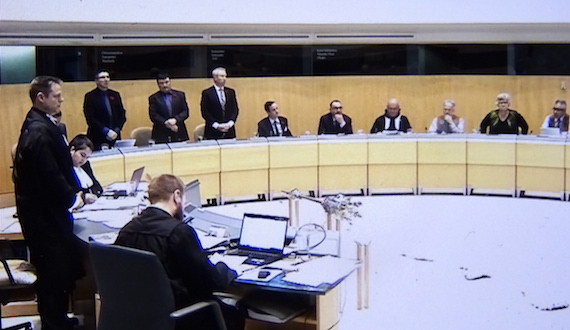 A cross-boundary issue: Northwest Territories MLAs stand in their territorial legislative chamber on Oct. 31 to support a motion to remove Wally Schumann, minister of infrastructure, for his role in the cancellation of the Marine Services Transportation barge into Paulatuk, Kugluktuk and Cambridge Bay last month. (SCREEN SHOT) 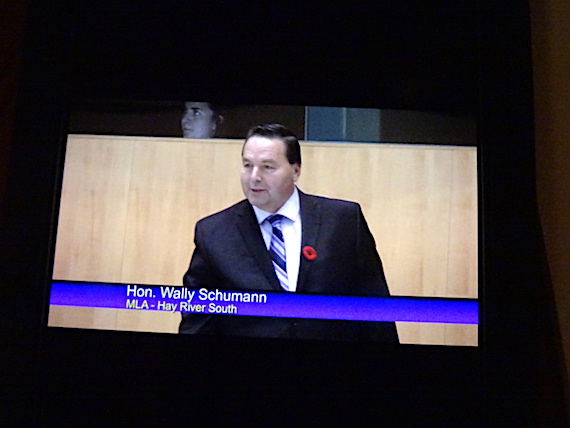 Standing on Oct. 31 in the Northwest Territories’ legislature, Wally Schumann, the territorial infrastructure minister, defends his input into the Marine Transportation Services’ decision to cancel the last barge into Paulatuk, Kugluktuk and Cambridge Bay. (SCREEN SHOT)

Customers of the Marine Transportation Services barge that was expected to deliver much-awaited freight to Kugluktuk and Cambridge Bay, until it was cancelled exactly one month ago, can take some consolation in what took place in the Northwest Territories’ legislature on Wednesday, Oct. 31.

Wally Schumann, the minister of infrastructure, who is responsible for MTS, nearly got kicked out of cabinet.

The motion that would have seen Schumann out of cabinet ended up being defeated, 12 to six, but, before the vote, Schumann had to listen to many MLAs slam his poor judgment and behaviour on the MTS file, which will end up costing N.W.T. taxpayers at least $3.4 million.

The motion to remove Schumann resulted from the cancellation of the last Arctic coast barge by MTS and the Government of the Northwest Territories, which has owned the Hay River–based sealift company since 2016.

The cancellation led to a $3.4-million airlift of fuel and materials, which is still underway, although many vehicles and materials will remain stranded in Inuvik until 2019. This may yet lead to legal action on the part of barge customers left without their trucks and other items too large and heavy to airlift by anything than a Hercules.

“At no point the minister has stood up, taken personal responsibility for this failure, nor has he apologized to the residents who missed out on these crucial deliveries; nor to those who will not see their shipments until the ice thaws come to the spring. Instead, he has insisted that the faults were due to unavoidable series of coincidences, and he is not to blame,” said Kam Lake MLA Keiron Testart, who put forward the motion in the N.W.T. legislature.

In remarks related to his motion, Testar also said Schumann’s refusal to accept responsibility for the actions of his department is “inconsistent with the principles of responsible government.”

Testart accused Schumann of “poor planning and pursuit of private sector business” in decisions that left barges unable to service Arctic coast communities, because they had been busy bringing supplies and fuel to mines in Alaska and Nunavut.

“MTS had ample opportunity to resupply Paulatuk and the other communities in Nunavut, but chose to put a higher value on the revenue opportunity presented by private contracts above the needs of northerners,” Testart said.

Earlier on Wednesday, in a public briefing on MTS, Schumann and his assistant deputy minister John Vandenberg spent a lot of time reviewing the reasons for the barge cancellation: the high water in the Mackenzie River, poor fuel first delivered to Hay River, the worst ice seen in 30 years—”many factors out of our hands,” as Vandenberg put it.

Many in Cambridge Bay didn’t buy these explanations during discussions held after the cancellation.

Testart acknowledged these three factors did prevent shipping, but only after MTS had run out of time to complete its community resupply operations “because it had become preoccupied with chasing private contracts in Alaska and the Sabina gold mine in Nunavut, putting business interests above the needs of everyday people.”

“I want the minister to say, ‘This happened on my watch. I take full responsibility,'” he said. “I’m looking for an apology to the coastal communities.”

There was some talk about “lessons learned,” but that didn’t seem like a good way out to Hay River North MLA R.J. Simpson, who stood up to support the motion to remove Schumann.

“If nothing went wrong, what is there to learn? If creating an emergency contingency plan will avoid the situation in the future, then doesn’t not having such a plan this year constitute a mistake? This non-mistake is costing taxpayers millions of dollars, but no one is taking responsibility,” he said.

In response to the motion, Schumann said, “I stand behind the decisions I have made.”

Before the vote, on Wednesday afternoon, during the briefing on MTS, Schumann and Vandenberg made no apology and didn’t mention compensation from MTS to cover the inconvenience and damages caused by the barge’s cancellation.

A customer who had hoped to see his new truck in 2018 said, “MTS has basically gone dark” and has not responded to his questions and concerns.

Customers in Cambridge Bay have told Nunatsiaq News they remain worried about the heated storage conditions in Inuvik, insurance for their stranded freight and what will happen if the MTS barge doesn’t arrive in 2019.

Despite an initial vow to bring everything from the cancelled barge in by air, the airlift of trucks—including pickup trucks, and water, sewage and garbage trucks for the Hamlet of Cambridge Bay—is “not feasible,” Vandenberg said.

Schumann and Vandenberg did offer an update on the airlift of materials to the communities: 450,000 pounds of cargo have been brought in by air so far. Charters are due in Cambridge Bay on Nov. 1 and Nov. 3, and on Nov. 2 in Kugluktuk.

The airlift could wrap up by the end of next week, they said.

The cost of the airlift will come out of the revolving fund for petroleum products and won’t be passed on to consumers, MLAs were assured.

But the GNWT plans to revise its five-year business plan for MTS, work on its operations and communications, and find ways to “reduce risk of non-delivery.”

Speaking in the public briefing, which you can listen to on the GNWT’s assembly website or its Facebook page, Vandenberg admitted they still have a lot of work to do to make MTS into a profitable company.

As for responding more to community concerns, Vandenberg said he’d be willing to return to Kugluktuk and Cambridge Bay, which he visited last month.