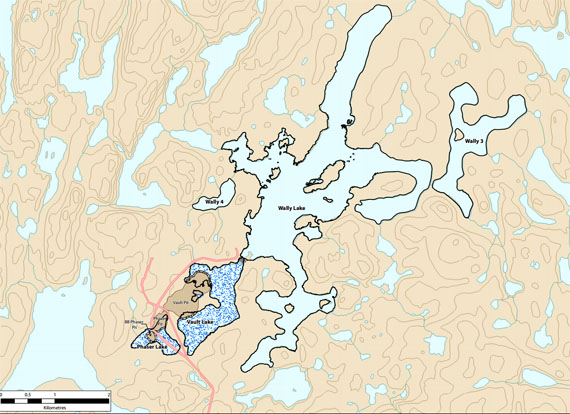 This map shows the existing Vault Pit and where it would expand into Phaser Lake, to create Phaser Pit. (IMAGE COURTESY OF AGNICO EAGLE)

The Nunavut Impact Review Board has okayed Agnico Eagle Mines’ latest environmental impact submission to expand its Meadowbank gold mine operations, and launched a public review of the project.

The result would be Phaser Pit, expected to produce more than 21,000 ounces of gold.

First, the NIRB had to review the project certificate, opting to request an addendum to Meadowbank’s final environmental impact statement, first issued in 2005.

Under advice from Aboriginal Affairs and Northern Development Canada to reconsider the project in an “expeditious a manner as possible,” the NIRB said July 30 that the new FEIS confirms with its guidelines.

Now, the NIRB has launched a public review of the proposed changes.

Those will include expanding small open pits from the perimeter of Vault Lake to the southwest into Phaser Lake.

Before that happens, however, the mining company will need to drain the lake of an estimated 700,000 cubic metres of water and remove fish from the lake before it could start mining there in 2017.

In order to do that, Agnico Eagle has been working with the federal department of Fisheries and Oceans on a fish-out plan, which will include “a salvage of as many fish as possible and the live release of fish into Wally Lake,” the final EIS addendum said.

The final EIS says there should be no significant increase in water levels in nearby Wally Lake as a result of the expansion work.

As part of the transfer, crews will pump any water seepage from Phaser Lake into an attenuation pond, where it will be treated and released into Wally Lake.

The removal of 2,945,477 tonnes of waste rock from Phaser Lake will not require a significant increase to the waste rock holding area, Agnico Eagle said.

To manage the dust expected to be kicked up during construction — planned for summer 2016 — the final EIS says the company’s crews spray water to keep it down.

Likewise, the company will use mufflers to lessen the noise of any drilling and blasting work at the site.

All the same, the expansion is likely to disturb wildlife in the region; the project may disrupt caribou migration routes and result in a minor habitat loss, the final EIS said.

To mitigate that, the company will continue to monitor wildlife sightings through a daily log, as it does elsewhere on the Meadowbank property.

Now, the NIRB is inviting the public to send its “information requests” on the Vault Pit proposal — not comments on the project, but rather questions on aspects of the project not outlined in the addendum.

Interested parties have until Aug. 28 to submit their requests to info@nirb..ca.