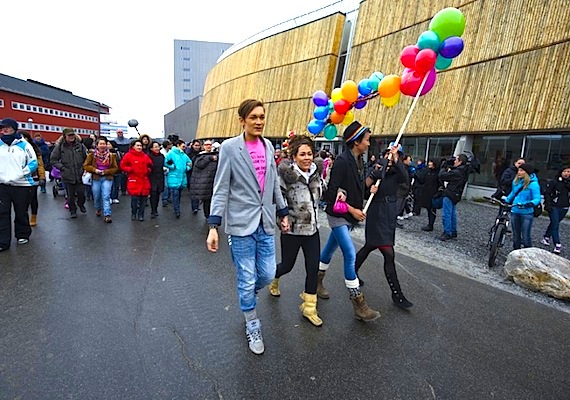 Nuuk celebrates Gay Pride in May 2012 with a parade around the city. Now, same-sex marriages can take place in Greenland. (FILE PHOTO)

If you’re gay, as of Oct. 1, you can now get legally married to your partner in Greenland: that’s because Greenland’s Inatsiartut legislative assembly legalized same-sex marriage May 26.

The vote was unanimous, passing with a 27-0 vote, with two abstentions.

Same-sex marriage has been legal in Denmark since June 2012.

“The Inuit Ataqatigiit has struggled over the past five years to get this law in place, so same-sex couples can marry on the same terms as couples of different sexes,” Aaja Chemnitz Larsen, a member of Inatsisartut’s family and health committee.

A bill to allow same-sex marriages in Greenland between was first made in 2010 — and the current proposal was put forward by the Greenland government, Sermitsiaq said.

But the government still has to amend its Children’s Act, which dates from 1963, and still applies in Greenland.

This means that same-sex couples cannot both be recognized as parents — the current law obliges one parent to adopt the couple’s joint child.

“These couples will continue to be discriminated against, because the couple cannot be a family on the same terms as heterosexual couples,” Chemnitz Larsen said.

IA called on the Greenland government to amend the Children’s Act as soon as possible.

Prior to this week’s vote on same-sex marriage, Greenland did allow registered civil partnerships between same-sex couples.