In the AWG limelight: a Greenland-Nunavut creative collaboration 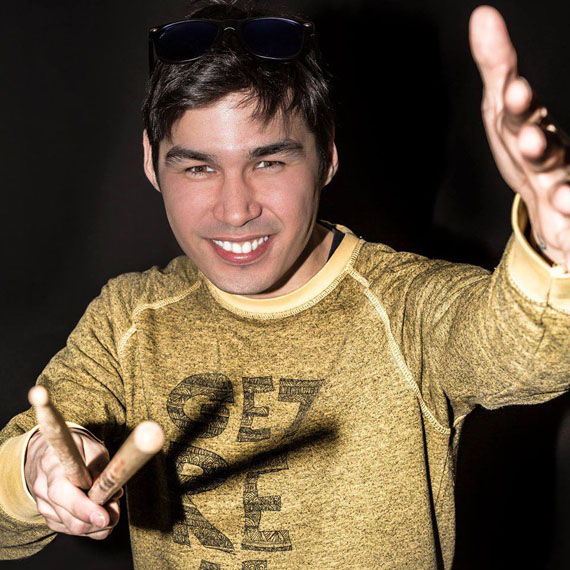 Jens Nielsen of Greenland is one of many performers scheduled to appear at concert inside Nakasuk School to be held 7:30 p.m. March 9 that will launch the Iqaluit segment of the Arctic Winter Games. (PHOTO BY ANDERS BERTHELSEN) 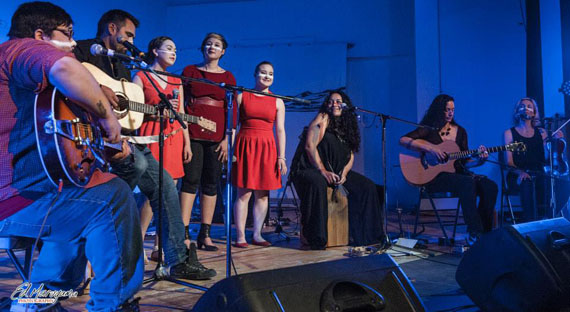 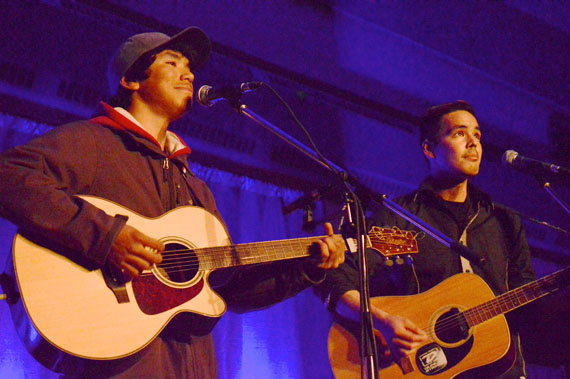 Joshua Haulli of Igloolik performing in Iqaluit this past October. (PHOTO BY STEVE DUCHARME)

Take some musicians who have never met and put them in front of hundreds of people. To expect a brilliant performance would be to expect bottled lightning or canned heat.

But that’s exactly what Laakkuluk Williamson-Bathory plans to do at an upcoming free concert launching Iqaluit’s portion of the 2016 Arctic Winter Games March 9 at Iqaluit’s Nakasuk elementary school at 7:30 p.m.

To prepare, Greenland and Nunavut musicians will rendezvous in the territory’s capital a few days before the concert to meet and orchestrate an evening of cultural exchange, celebration of shared roots, and — most importantly— raucous jamming.

“There is so little opportunity for this kind of cultural exchange and it’s especially awesome to have it with Inuit, sharing their musicality and sharing their language,” Williamson-Bathory said.

Williamson-Bathory, alongside Iqaluit business owner and former civil servant Victor Tootoo, were appointed by the Arctic Winter Games host society to serve as cultural ambassadors for the games in Iqaluit.

And Williamson-Bathory is tasked with curating Iqaluit’s portion of the festivities.

And for the Greenland musicians, this performance will mark their first trip to Nunavut.

“What we are most excited about is the chance to play our music to a different kind of audience. And of course to meet new people and see the differences and similarities between our cultures,” Joelson and Sørensen said in an email to Nunatsiaq News.

“It is important to create a dialogue where we can learn about our history, both the differences and the things we have in common. But also see what the future holds and what dreams we have for the future,” added Nielsen.

The future, said Williamson-Bathory, is really what the concert is all about — to showcase the circumpolar world as a community that stretches across the borders of territory and nation.

“I think people find that kind of exploration inspiring,” she said.

“It’s overcoming colonial barriers, and it’s overcoming financial difficulties in making things happen, for people to actually use Inuit culture and Inuit languages in ways that are exciting.”

So what should we expect to hear at the concert?

“A lot of the music that young Inuit make has to do with love, love in terms of a deep relationship with the land. And I think that’s so magical,” she said.

The concert is managed in partnership with the Alianait Arts Festival, which will retrofit the Nakasuk gym with extra stage platforms, lights and a full sound system usually reserved for its summer concert lineup.

And to capture the kind of spontaneity usually reserved for marquee concerts — and on the international stage — Alianait director Heather Daley says the show deserves a full production treatment.

“Normally we would not go through all this trouble for one show,” she said.

“Two and a half days of creating a show with people who have never, except for the Inuksuk Drum Dancers, performed together before. It’s creating something new.”

The free community concert will start at 7:30 p.m. March 9 in the Nakasuk gymnasium.

Hockey players in town for the Arctic Winter Games will be allowed to attend a 3:00 p.m. dress rehearsal earlier that day.

The next day, on March 10 at 2:00 p.m., Joelson and Sørensen will perform an exclusive acoustic show for elders at the Elder’s Qammaq in Iqaluit.

The show will be followed by a 5:30 p.m. public workshop and jam session at the Qammaq that’s open to all musicians.

The 2016 Arctic Winter Games will take place March 6 to March 11 in Nuuk, Greenland, with a satellite hockey tournament in Iqaluit form March 7 to March 10.

Previous stories on Nunatsiaq News about the games include:

• Nunavik athlete rallies from loss ahead of Arctic Winter Games: “All that grieving led to alcoholism. My family was drinking a lot”