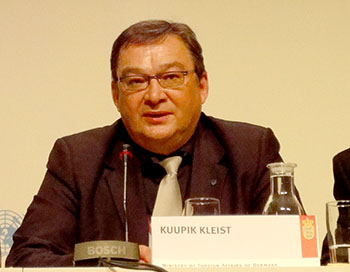 China has no ice-choked waters. Yet, China has six icebreakers and is building another six.

That says something about China’s interest in the Arctic, notes Greenland’s newspaper Sermitsiaq/AG.

China’s increasing interest in Arctic issues is also evident in its recent effort to obtain permanent observer status with the Arctic Council, the eight-nation forum that includes Canada and the four other Arctic Ocean coastal states — Denmark, Russia, the U.S. and Norway — as well as Sweden, Iceland and Finland.

During an Oct. 28 speech in Beijing, the Danish ambassador to China, Friis Arne Peterson, said China has “natural and legitimate economic and scientific interests in the Arctic,” even though it lacks a coastline in the polar region.

Peterson went on to say that his government would like to see China granted permanent observer status in the Arctic Council.

“China has a legitimate right to be interested in and participate in what happens in the Arctic, but it requires that the rules are observed,” Kleist said last week during a media briefing at the International Press Center in Copenhagen.

“They must not believe that they can come and decide about the residents and just take care of the resources in the Arctic, which are regulated by laws, treaties and binding agreements, “ Kleist said. “Those cannot be tampered with.”

This week Greenland’s minister for minerals, industry, and labour is in China this week on a trade mission.