“The road to success must be built on significant, long-term and sustained efforts” 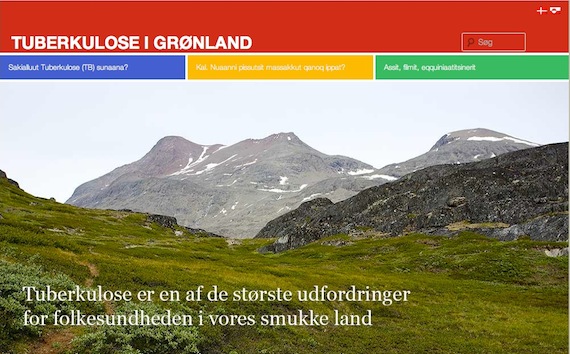 If you live in Greenland, you can learn more about TB on a bilingual website, in Danish and Greenlandic, which provides easy-to-understand information about TB, as den here in this screen shot.

Tuberculosis continues to pose a major threat to health in Greenland.

“The size of the challenge we face cannot be underestimated. The road to an acceptable incidence of the disease is long. The path to extinction [of TB] is even longer,” the Greenland government said March 23 in a statement released in advanced of World TB Day, March 24.

In 2014, 95 cases of TB were detected — which means Greenlandic Inuit suffer from TB at about the same high rate as Canadian Inuit.

Homeless infectious TB patients constitute a major source of disease spread in several cities in Greenland, and particularly in Nuuk, the statement said.

And complete eradication of the disease will require improved housing, reduced unemployment and generally better living conditions for the disadvantaged, the Greenland government said.

“The road to success must be built on significant, long-term and sustained efforts from the central authorities, from health care and from the citizens themselves.”

Greenland also has its own website in Greenlandic and Danish with a quiz about TB that offers winners a gift certificate of roughly $100 Canadian.