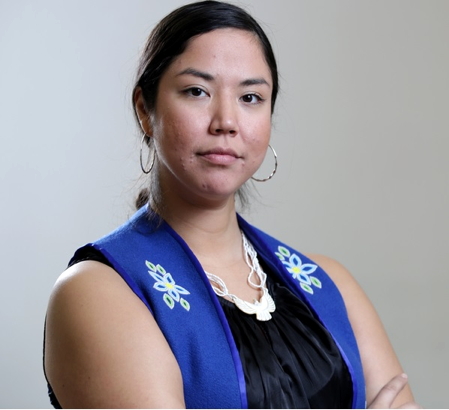 Greenpeace is now taking Clyde River’s fight against seismic testing off the coast of Baffin Island to the United Nations.

Greenpeace Canada, keen to build partnerships with Inuit and First Nations on environmental causes, made a speech at the United Nations July 15 in an event that focused on climate change and sustainable development.

“Climate change is very much alive and present in the North, and naturally, so is industry. As the ice retreats, Big Oil is banging down our doors for permission to conduct seismic testing as a step towards drilling for oil,” said Kiera-Dawn Kolson, a Dene woman and Greenpeace’s Arctic outreach campaigner in Yellowknife.

“Even when communities say no, as they are now in Clyde River, industry is exploiting its relationship with the federal government, and the National Energy Board is ignoring the communities they pretend to listen to, and going ahead with the seismic testing in spite of mass opposition.”

Jerry Natanine, mayor of Clyde River, and Niore Iqalukjuak, are currently mobilizing support for a campaign to stop not just seismic testing off shore of their community — something that was recently approved by the National Energy Board — but underwater oil and gas exploration which they believe will soon follow once seismic data identifies seabed reservoirs.

They are circulating a petition, which you can find on their Fight Against Seismic Testing in Nunavut Facebook page, and are also organizing a protest on July 23 at 1 p.m. in Clyde River.

They are hoping Nunavummiut in other communities protest in solidarity on the same day.

Kolson made her speech at the UN’s headquarters in New York City at a United Nations side event that accompanied the 13th Session of the Open Working Group on Sustainable Development Goals.

That side event — A Global Call Spanning the Polar Regions to the Tropics — was organized by mostly indigenous and environmental groups including the permanent missions of Peru and Solomon Islands, the UN Non-Governmental Liaison Service, the Natural Resources Defence Council and Greenpeace.

“Many First Nations, Inuit and Metis communities in northern Canada are still living in third and fourth world conditions without basic human rights,” Kolson said. “And industry knows this and exploits this to its advantage. Because people need food now. They need a roof over their kids’ heads tonight.”

With words that echo a lively, and hourly, exchange of ideas on the seismic testing protest page on Facebook, that was created by Iqalukjuak, Kolson talks about the need for northerners to take control of their own future.

“We are of the land and the land is of us and Arctic indigenous peoples deserve more than to be treated as spectators to their own lives. Rather than perpetuating the cycle of need that locks us into unsustainable boom-bust projects, we must make space that enables communities to focus on long term solutions and sustainable development.”

You can watch Kolson’s speech, and other speakers at this event, at the UN Web TV archive here.