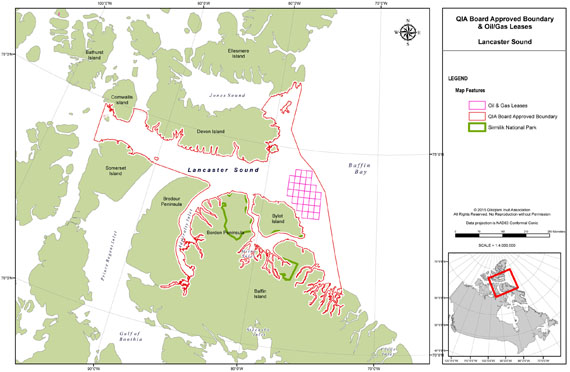 The environmental group Greenpeace claims that a series of exploratory oil permits holding up the creation of a marine conservation area around Lancaster Sound may have expired decades ago.

Those permits, issued to Shell Canada in 1971 under a six-year lease, haven’t been officially renewed since 1978, according to federal documents obtained through freedom of information requests made by Greenpeace Canada.

Both Shell and Indigenous and Northern Affairs Canada insist those permits are still valid, despite the absence of any paperwork to prove it, says Greenpeace.

“The government doesn’t seem to have any record of the permits being renewed in 1979,” said Greenpeace Canada’s Arctic organizer, Alex Speers-Roesch.

Since that time, no communication between Shell and the government concerning the validity of the permits is on file, Speers-Roesch added.

The creation of a national marine conservation area around Lancaster Sound, near the northern tip of Baffin Island, has been a longstanding project in Nunavut, led most recently by the Qikiqtani Inuit Association and Parks Canada.

But the proposed borders of the conservation area, set by the former Conservative government in 2010, excluded the existing permit locations near Bylot Island.

That proposal goes against the wishes of the QIA which, after consultation with hunters and other knowledge holders, seeks a conservation area that includes where Shell supposedly holds those exploratory permits.

In a 2014 feasibility meeting with the federal government and the QIA, Shell Canada indicated they were open to parting with the permits — provided they received appropriate compensation in return.

But handing over the permits would only occur after seismic testing on those sites is completed, Shell said.

That further complicates the problem because of a de facto moratorium on seismic testing in Nunavut waters; the QIA won a court injunction against seismic testing there in 2010.

A Shell spokesperson at the 2014 meeting advocated for a “need to form strategies and policies” to help them advance a resolution.

“Shell was trying to use those negotiations about the conservation area to get around the moratorium in the region, saying they wouldn’t give up their permits unless they were allowed to conduct seismic testing,” Speers-Roesch said.

Indigenous and Northern Affairs Canada director Michel Chenier defended the validity of the permits in a series of correspondences with Erin Ryder, a lawyer for environmental group Parvati, who shared her information with Greenpeace.

“There was and is no statutory requirement under the Canada Oil and Gas Regulations that permits must be stamped for renewal purposes,” he wrote in an email to Ryder March 16, 2016, obtained by Nunatsiaq News.

Policy expert and University of Calgary professor Nigel Bankes says in a report commissioned by Ocean’s North in 2015 that Shell, under Canadian law, should have continued to apply for renewals each year after 1978 to maintain the permits.

“If there was no such application, then the permits should simply have expired in accordance with their terms somewhere around August 1979,” he wrote.

“Given this, the onus must be on Shell to point to something else that has kept these permits alive.”

Simply having the permits on file, Bankes continued, does not validate their existence today.

“The onus must be on Canada and Shell to show some lawful means by which these permits have been continued. Registration of the permits in the department is not conclusive of anything,” he wrote.

Greenpeace hopes the new information will prompt the Trudeau government to reevaluate its stance concerning the conservation area.

“We’re hoping that the new federal government will take a different position from the former federal government and that they will prioritize conservation in Lancaster Sound in line with the desires of Inuit and environment organizations,” Speers-Roesch said.

“That they will look further into the issue with these permits, and if it can’t be concluded that they are in fact valid, and the concerns that have been raised turn out to be true, that they take them off the books.”

The Trudeau government has set a goal of protecting 10 per cent of marine and coastal areas by 2020, under Parks Canada’s National Marine Conservation Area program.

Protecting the entirety of the Lancaster Sound conservation area, said Speers-Roesch, would go a long way to achieving that goal.