Lesser charges carry half the punishment 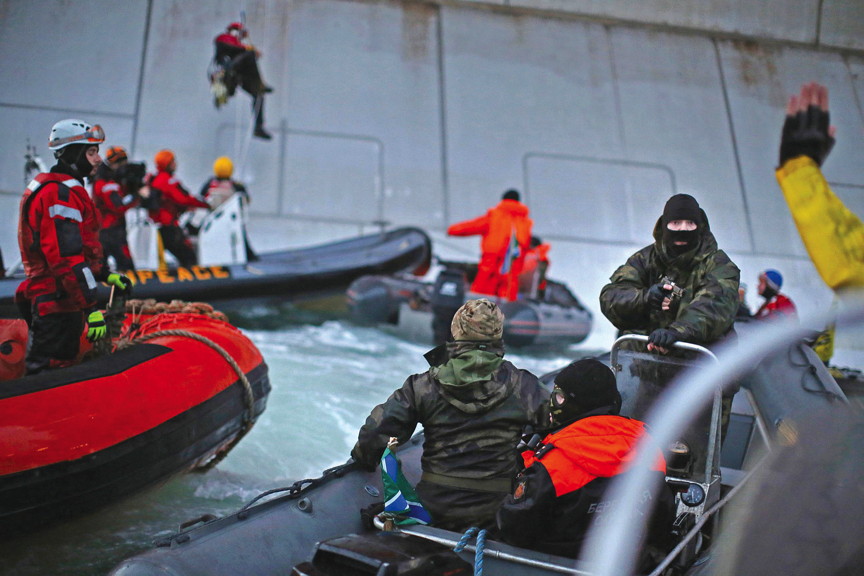 Greenpeace protesters getting arrested as they attempt to board the Gazprom Arctic oil platform. (FILE PHOTO)

Piracy charges laid by the Russian government against a group of 30 Greenpeace activists have now been replaced with charges of “hooliganism.”

The activists were arrested off Russia’s coast in the Pechora Sea Sept. 18 after two of the them scaled a Gazprom Arctic oil platform in protest of oil exploration near the Russian Arctic National Park.

The 30 activists, who include Canadians Paul D. Ruzycki of Ontario and Alexandre Paul of Quebec, have spent six weeks in a Russian prison in the Arctic port city of Murmansk.

“The Arctic 30 are no more hooligans than they were pirates,” Greenpeace Russia’s spokesperson Vladimir Chuprov said.

Chuprov said the charge carries up to seven years in jail. That’s less than half what the maximum sentence is for piracy.

But Chuprov said Greenpeace will contest the hooliganism charges “as strongly as we contested the piracy allegations.”

“It represents nothing less than an assault on the very principle of peaceful protest,” he said.

“Those brave men and women went to the Arctic armed with nothing more than a desire to shine a light on a reckless business,” Chuprov said.

Chuprov said a Russian investigative committee could, in fact, charge some of the activists with “use of force against officials.” That charge carries a punishment of 10 years in prison.

“Greenpeace has a 42-year history of entirely peaceful activism. It is a cheap libel to accuse those campaigners of doing anything other than protesting peacefully, they arrived at that oil rig in a ship painted with a dove and a rainbow.”

“Our ship was seized by men with knives and guns, while the Arctic 30 raised their arms,” he said.

As of Oct. 8, 1.1 million people worldwide have sent their Russian embassies emails demanding the activists’ release.