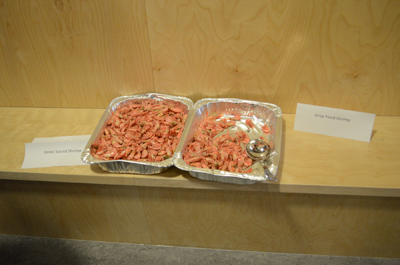 Samples of shrimp caught in Jones Sound near Grise Fiord. (PHOTOS COURTESY OF THE AFA) 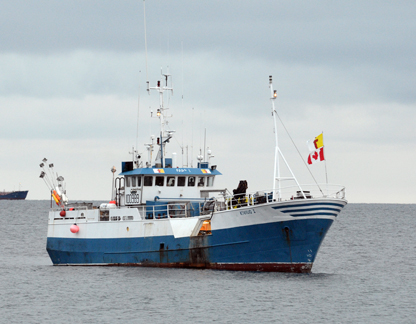 The Arctic Fishery Alliance’s vessel the Kiviuq I anchored off Grise Fiord. (PHOTOS COURTESY OF THE AFA)

Hunters from Grise Fiord, Nunavut’s northernmost community, say they’re excited about the prospect of developing a local fishery after netting a big catch in local waters.

The Arctic Fishery Alliance — made up of hunters and trappers organizations from Qikiqtarjuaq, Grise Fiord, Arctic Bay, and Resolute Bay — and researchers from Memorial University’s Fisheries and Marine Institute, recently embarked on a 13-day exploratory fishing project in nearby Jones Sound.

Harvesters and researchers fished with baited whelk pots, or traps, and hook-and-line gear.

On each day of the expedition, the traps captured three species of coldwater shrimp as well as whelks, or sea snails. On some days, the traps yielded hundreds of shrimps and whelks.

The discovery of those two species, and in such large numbers, has Grise Fiord taking the first steps towards opening a local, inshore fishery.

“The excitement in our community is unbelievable,” said Jaypetee Akeeagok, chairman of Iviq Hunter and Trapper Organization, in a Sept. 29 release put out by the Arctic Fishery Alliance.

“The HTO is already making plans to apply for funding to purchase shrimp traps to further explore the commercial potential of these species,” Akeeagok said.

“Whelk pots are not designed to capture coldwater shrimp efficiently, which could mean the actual commercial potential of this species is even greater than the results so far.”

“We hope now that the Government of Nunavut has seen the benefits of this voyage by the Kiviuq I, they will change their position on our request for assistance,” Akeeagok said. “Communities such as ours need the GN to step forward and help us help ourselves.”

This is the Arctic Fisheries Alliance’s second attempt to gauge the wealth of Grise Fiord’s waters. Last year, the group tried to carry out a five-day turbot fishery, but was forced to leave the area early because of ice conditions.

But this most recent exploratory fishery is the first of a number of Arctic Fishery Alliance-sponsored expeditions in eastern Nunavut set for the coming months.

The Alliance’s vessel, the Kiviuq I, will carry out a second exploratory fishery near Arctic Bay this fall, and possibly in other communities if ice conditions and funding permit.

The study is paid for by the Alliance’s reinvestment of revenue generated by previous Greenland halibut quotas.

Researchers from Memorial University in St. John’s, Nfld., will also take part in the program by collecting data to better understand the ecosystems around each community.

The Kiviuq I will also help researchers from the Ocean Tracking Network to collect its data-recording devices stationed near Resolute Bay and re-position them near Qikiqtarjuaq.