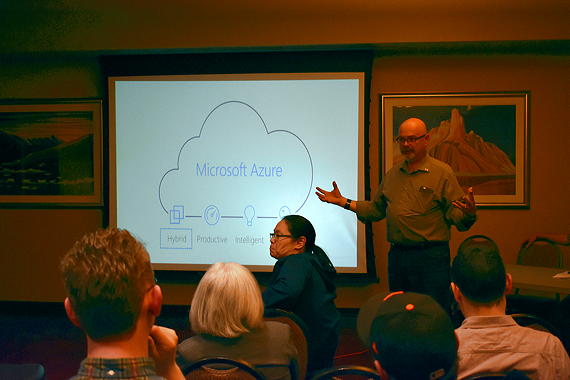 Damir Bersinic, hybrid cloud sales lead at Microsoft Canada, speaks at an information session on Aug. 24 in Iqaluit. The session, hosted by Mayor Madeleine Redfern, who is also the president of the Nuvujaq Society, focussed on plans to improve internet services in Iqaluit. (PHOTO BY COURTNEY EDGAR)

When an Iqaluit resident sends an email to a next-door neighbour, the information travels in an extremely roundabout way.

Because there are no fibre-optic cables connecting the city to the outside world, all data transmission depends upon satellite links. That means the information contained in that email bounces back and forth between Earth and an orbiting satellite multiple times before the neighbour gets the message. This dependence on satellite service makes Nunavut’s internet slow and expensive.

But there’s a plan to speed things up within Iqaluit, by routing data so that it isn’t transmitted into outer space when it’s only intended for someone else within the city.

“We are not increasing the bandwidth that people have … but what we’re doing is building infrastructure to add content,” said Jacques Latour, technology officer at the Canadian Internet Registration Authority.

“It is the plumbing of the internet that we are focusing on.”

Latour spoke at a public information session on Wednesday, Aug. 22, at the Frobisher Inn held by the Nuvujaq Society, a new non-profit pushing to improve Iqaluit’s internet services. Iqaluit mayor Madeleine Redfern, who is the society’s president, hosted the discussion for the society, whose name means cloud in Inuktitut.

Damir Bersinic, hybrid cloud sales lead at Microsoft Canada, and Mike West, CEO of Nuvujaq, also presented. Bersinic spoke about the potential for online applications to be locally hosted in Iqaluit, with the help of a Microsoft service called Azure.

Besides the organizers, a dozen people gathered to discuss the group’s plans. Redfern says that Nuvujaq now has an email list of over 50 people.

The group hopes to build a data centre, stocked with lots of wires and shelves of servers, to help run what’s called an internet exchange point. That’s what would allow residents to share information online without the use of satellites, and the Canadian Internet Registration Authority has been tasked with helping Nuvujaq set that up.

Nuvujaq also says a data centre could help support what’s called a community cloud. That could see these local servers store big files, like software updates, or locally produced content, to make this information much quicker to access.

However, it remains to be seen whether Iqaluit’s internet service providers will get on board with this plan.

While there is general agreement about the idea after meeting with the internet service providers and other organizations that have telecommunications networks in Iqaluit, Redfern says, they are still in the early stages of planning.

Right now, the group says it’s in the funding and planning stage. Redfern wouldn’t say much about the group’s finances, other than that it has some private funding, and interest from both private and public investors down the line.

It is too soon to talk about pricing, Redfern said at the meeting. However, the data centre should cost less than a million dollars, she said.

“There is a number of important next steps which Nuvujaq and CIRA will undertake towards making an Iqaluit IXP a reality. Those steps will be fleshed out next week, as the meetings Nuvujaq and CIRA has had this week were extremely helpful in ascertaining the direction and work to be done,” Redfern said.