Groups in NWT, Nunavut ponder measures to save caribou 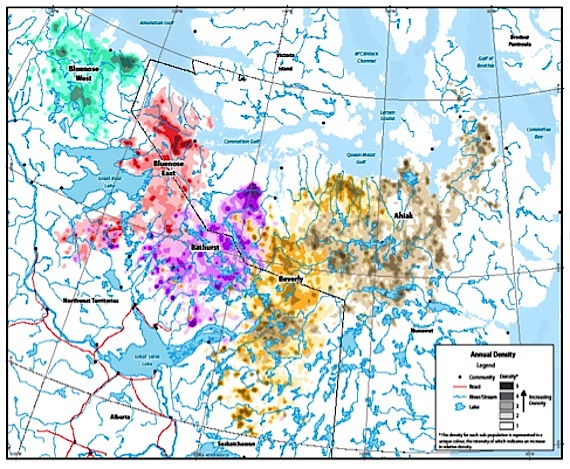 This map shows the ranges of the barren-ground caribou herds in the Northwest Territories and Nunavut from 2006 to 2012 — the Bluenose-East and the Bathurst caribou herds roam between the NWT and Nunavut. (MAP COURTESY OF THE GNWT) 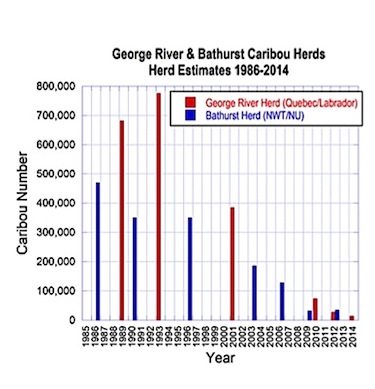 This graph from the GNWT presentation on caribou shows the similar declines in two formerly healty herds — the George River herd and the Bathurst herd. 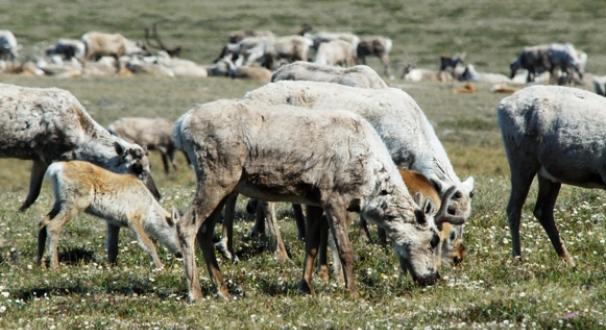 The numbers of caribou from Bluenose-East herds have also plunged. (PHOTO COURTESY OF THE GNWT) The numbers of Bathurst caribou and calves have declined steeply in recent years, according to a 2014 survey. (PHOTO COURTESY OF THE GNWT)

How do you stop the Bluenose-East and Bathurst caribou herd populations from crashing?

That’s what wildlife biologists, hunters and representatives of co-management groups in the Northwest Territories and Nunavut will talk about in Yellowknife Nov. 7 at a meeting of wildlife co-management boards and First Nations and Inuit leaders.

While there’s consensus that a huge population drop has occurred, there’s no similar agreement on the causes of this decline — or what management actions should be taken to turn the situation around.

Ask James Panioyak, chair of the Ekalututiak Hunters and Trappers Organization in Cambridge Bay, about why caribou numbers are down, and he’ll say, as he did after a recent caribou technical meeting in Yellowknife, that it’s due to “so many predators killing off the calves and caribou herds — large wolf packs and the increasing number of grizzly bears that prey on the caribou herds that we hunt.”

Hunters have estimated that an adult wolf can consume 30 to 50 caribou a year, and grizzly bears 10 to 30 caribou per year.

Panioyak would like to see predation control programs set up in western Nunavut to cull wolves and grizzly bears instead of restrictions on hunting.

This is the message Panioyak brought to the caribou technical meeting last month, where groups from the NWT also maintained hunting is just part of the problem — although the Dene First Nation now appears likely follow the Tlicho in cancelling their caribou hunts this fall in light of those low survey numbers.

Additional factors in the caribou population declines, cited by biologists, First Nations and Inuit alike, include natural, long-term cycles, weather and climate change, diseases and parasites, disturbance and cumulative effects as well as forest fires on winter ranges in the NWT.

As for other possible reasons: some suggest Nunavut allows irresponsible levels of mineral exploration and development activity, with a focus more on protecting harvesting rights than protecting caribou habitat.

The results of all these factors, according to biologists, include a low cow survival rate, low pregnancy rate and altogether fewer cows on calving grounds.

They say the probability of their missing caribou during surveys or that the caribou have moved to the east are low. Those objections were also raised at last month’s Kitikmeot Wildlife Management Board annual general meeting in Cambridge Bay.

There, a presentation by GNWT biologist Jan Adamazewski suggested that hunting, during which 60 per cent of the harvest consists of cows, is under-reported for both herds and may contribute to their plunging numbers.

At these low levels, Adamazewski said predation — in addition to hunting — can be even more devastating.

But his presentation also included a graph in which the numbers of wolf pups mirrors the decline of Bathurst caribou.

So the NWT and Nunavut groups could look east to see what management measures have been taken to counteract that herd’s decline.

In 2013, the Newfoundland and Labrador government set a five-year ban on all hunting of the George River caribou in Labrador.

And, in Nunavik, the Cree, Inuit and Naskapi scored a victory this past August when the Quebec Court of Appeal declared the provincial government had violated their treaty rights when it set caribou sport hunting levels and dates in northern Quebec for the 2011-12 season.

The court of appeal held that the decision to flout the process set out in the James Bay and Northern Quebec Agreement stemmed from administrative priorities and a desire to accommodate outfitters serving sports hunters, Makivik said.

The court said that, under the JBNQA, the traditional way of life of the Aboriginal peoples takes clear precedence over sports hunting.

These graphs from a GNWT caribou presentation show the estimates in the populations of the the Bluenose-East herd and the Bathurst herd, based on 2014 surveys.