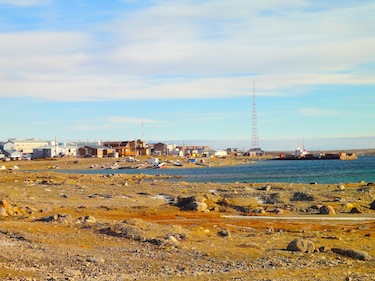 This site in Cambridge Bay been mentioned as a possible location for the future Canadian High Arctic Research Station. (FILE PHOTO)

In Cambridge Bay on Aug. 23, Prime Minister Stephen Harper delivered the news that people in the Nunavut community of 1,500 had been waiting for: the federal government plans to spend $188 million on the future Canadian High Arctic Research Station and its science and technology program.

The roughly 8,500 square-metre station will incorporate laboratory space, offices, workshops, accommodations, dining and food preparation facilities, and a recreation area. Its design will include the use of green technologies.

“The North is a fundamental part of Canada’s heritage, future and identity, and we must continue to assert our sovereignty over Canada’s Arctic,” Harper said. “This new station will undertake science and technology research that will support the responsible development of Canada’s North, inform environmental stewardship, and enhance the quality of life of Northerners and all Canadians.”

The science and technology program at CHARS will focus on priorities identified as part of Canada’s Northern Strategy and foster sound “social, economic and environmental stewardship of the Arctic through traditional and solutions-driven initiatives,” an Aug. 23 news release said.

Between 35 and 50 seasonal, part-time and full-time staff will be employed at the station, starting in 2017.