Harper winds up Arctic tour with a demonstration of force 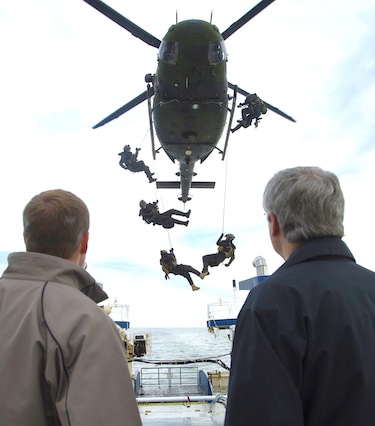 Prime Minister Stephen Harper and Peter MacKay, Minister of National Defence, look on as Canadian Armed Forces members board “a vessel of interest” during Operation Nanook. (PHOTO COURTESY OF THE PMO)

After visiting the western Nunavut community of Cambridge Bay to make announcements about the Canadian High Arctic Research Centre, Leona Aglukkaq’s future role as chairperson of the Arctic Council and the continuing hunt for the Franklin expedition’s lost ships, on the final day of his annual Arctic tour Prime Minister Stephen Harper turned his attention to the military’s role in defending Canada’s sovereignty.

Harper visited the site of Operation Nanook near Churchill where he participated in an emergency response simulation to a human smuggling scenario along with Peter MacKay, the defence minister, and General Walter Natynczyk, the chief of defence staff.

“Canada’s North is a cornerstone of our government’s agenda and a sovereign country must have the ability to defend its territory, all of its territory,” Harper said Aug. 24. “The Canadian Armed Forces and other government departments are doing a terrific job of defending our interests and preparing Canada for a possible emergency or security issue in the North. That is why our Government is committed to supporting our men and women in uniform to ensure they have the right equipment to get the job done.”

Through history and geography, “it has become Canada’s destiny to protect a large portion of our planet’s North. Canada has been a consistent champion of the Arctic as a zone of responsible development, environmental protection and international peace,” Harper said during a speech aboard HMCS St. John’s.

The demonstration, conducted in Hudson Bay about 55 kilometres from Churchill, saw about 30 members of JTF-2 elite force board the mock commercial vessel at sea.

Some rappelled from two Griffon helicopters onto the back deck of the ship, while others boarded from the water to secure the vessel and its passengers.

Last year’s Operation Nanook in Resolute Bay was to have involved the military response to a simulated crash of two aircraft: this exercise was suspended following the Aug. 20 crash of First Air flight 6560 near the Resolute Bay airport, which killed 12 and injured three.

“Sadly, possible scenarios sometimes become tragic realities as we saw last year in Resolute Bay with the crash of a First Air jet,” Harper said. “It was a sad reminder that, in an uncertain world, constant preparedness is a soldier’s occupation.”

Operation Nanook, which also included a response to a “security breach” in the Western Arctic, cost about $16.5 million.