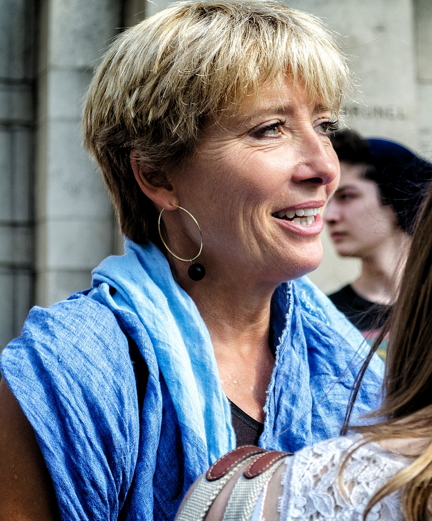 Oscar-winning British actor Emma Thompson has thrown her support behind the Inuit of Clyde River and their fight against seismic testing.

In a news release published through Greenpeace, Thompson signed her name to a statement requesting that the National Energy Board reverse a decision that approves offshore seismic surveying in Baffin Bay and Davis Strait.

“Inuit have been stewards of the Arctic for millennia and it’s terrifying to think the region could be devastated by the greed of oil companies in an instant,” Thompson said in the Greenpeace news release.

“Seismic blasting — a precursor to destructive oil drilling — threatens marine life that are already vulnerable to impacts of climate change,” she said.

“If companies get away with drilling for oil, communities will then have to deal with oil spills in Arctic waters that are impossible to clean up.”

The companies who wanted to conduct seismic testing off the east coast of Baffin Island recently backed away from plans to begin the seabed mapping during this summer’s ice-free season, which usually begins in July.

But that doesn’t mean they won’t one day embark on the five-year project. Right now, they’re just waiting for some legal wrangling to play out, and hoping it ends in their favour.

The Hamlet of Clyde River, Mayor Jerry Natanine and the local Nammautaq Hunters and Trappers Organization are currently embroiled in a court appeal process to reverse the 2014 NEB decision.

The lawyer representing the Inuit of Clyde River in the Federal Court of Appeal said the case is “about the right to eat.”

The panel of three federal court justices, who heard the case this spring in Toronto, have reserved their decision for the time being.

Thompson isn’t the only celebrity to come forward in support of the tiny North Baffin community.

Thompson is known for her roles in the Harry Potter movie series as Professor Sybil Trelawney.

She won an Oscar in 1992 for Best Actress for her role in the British drama Howards End.

Thompson is also the screenplay writer and lead-actor in the Nanny McPhee movies.

Seismic testing consists of a boat pulling an air gun which emits loud, underwater booms. Sound waves travel through water and into the ground below and are then interpreted to get a picture of what lies beneath the ocean floor.

Some marine scientists believe the sound waves are harmful to ocean mammals and fish and Inuit are therefore concerned about the impact this extensive mapping procedure will have on harvesting.

Inuit also argue they were not properly consulted, as is their constitutional right when development has the potential to impact culture and livelihood.