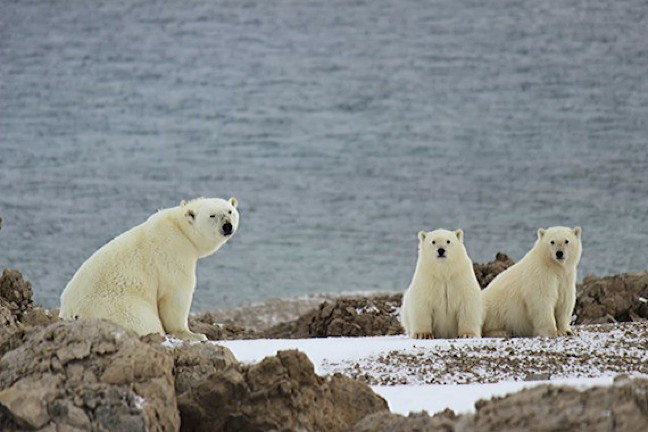 Food availability at the Resolute dump site has prompted a number of polar bears to linger near the community in recent weeks, causing concern for local residents. These bears were photographed last year near Resolute. (PHOTO BY CHRISTIAN JOLY)

Tabatha Mullins might be mayor of Resolute Bay, but lately she’s been busy in her other job: polar bear wrangler.

Polar bears usually migrate away from the hamlet this time of year but for some reason, a number of bears have been sticking around the High Arctic community of 240 and making its residents a little nervous.

“Although we’re getting a lot of ice that is drifting in and out, and the bays are frozen, they’re just sticking around eating easy food I guess — garbage,” said Mullins, a conservation officer.

Mullins blames the younger groups of families for not wanting to budge, saying that it’s mostly first-year polar bears that stick around.

The polar bear situation is so bad that on Oct. 18, schools had to be closed as a safety precaution, although there was also a heavy blizzard that day which offered was another good reason for the kids to stay home.

“Over the weekend we had quite a [few polar bears] — that was okay because nobody goes to work or school. But yeah, we’re trying to keep it under control. But they are hanging around the dump,” she said.

Mullins has had some tough days: waking up at 4:30 a.m. to scare off the polar bears in the community with everything from a “shotgun, cracker shells, and then [I] use rubber bullets and a horn.”

While on the phone from Resolute, she counted 18 polar bear sightings since last week, although its unclear how many individual animals that means, and she has only one volunteer to help her shoo them off.

“Well, we keep chasing them away. Sometimes when they’re bothersome too much during the night I go out during the day on a patrol and try to chase them out further.”

Polar bears are most dangerous when the sun goes down.

“During the day [it’s] safe. At night I don’t know sometimes because […] we do have to sleep. And there are some people that are up at night,” Mullins said.

It doesn’t help that curious Resolute residents are driving around the polar bears, looking to snag a glimpse and maybe a photo, too.

“When the bears first start coming in people are very interested and take pictures of them. So they sit in their trucks and do that,” Mullin said.

“After a while [the bears] get to know your vehicle and they know not to be scared or run away.

“So I just keep chasing them off whenever I do see them and it’s sort of helping out a little bit,” she said.

Mullins said the polar bears have stayed away from the community over the last two days, but are still lingering nearby. She’s hoping they will march out into Lancaster Sound some day soon.

In the meantime, everyone in Resolute is on alert.

“We try to tell [residents] to keep their eyes open more during the night times and days,” she said.

“Hopefully you’ll be able to see the bear before it sees you so you can run in the house.”