HTA: “The community of Resolute doesn’t have the infrastructure to deal with the oil spill” 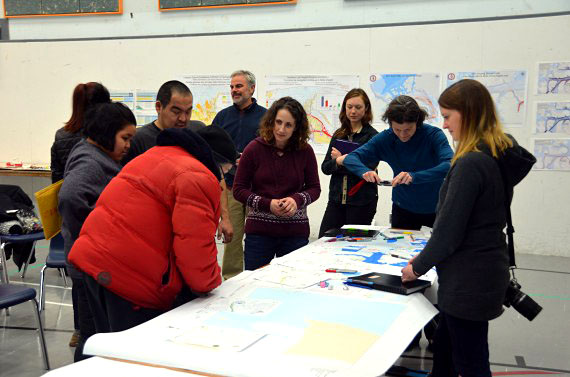 If Nunavummiut are going to act as first responders to any future oil spills in the High Arctic, then they need to be trained to both maintain and deploy response equipment for those spills—and they need to be paid to do that work, WWF-Canada says.

That’s why WWF-Canada is drafting an oil-spill response plan with Resolute Bay residents, following a series of consultation meetings held in the High Arctic community of about 200, March 12 to March 16.

“There is going to be an oil spill here one day. It’s not if, it’s when,” said Joadamee Amagoalik of the Resolute Bay Hunters and Trappers Association.

Right now, the community is set up with a sea can holding a boom, aluminum boat and outboard motor to use if a spill happens. But that equipment is kept at a place on the shore where heavy ice would make deploying a small craft difficult for most of the year. And the equipment hasn’t been checked on in years, according to Amagoalik.

“We don’t even know if the outboard motor really works,” he said.

The community meeting came following a learning exchange held in Iqaluit in November, when Inuit from Nunavut and the Northwest Territories met with WWF and government departments to talk about the need for community-specific spill response plans.

In a statement, the Canadian Coast Guard said it is responsible for monitoring and managing cleanup of “ship-sourced spills of oil and other pollutants in Canadian waters.”

Yet both ice and remoteness mean it could take days for a coast guard ship to arrive at a spill site. If the vessel the spill came from doesn’t clean up a spill, or isn’t prepared to do so, then Amagoalik said his community would be unprepared to react in the meantime.

“It would take a while for any kind of response to happen, especially if the coast guard is not in our area,” he said. “The community of Resolute doesn’t have the infrastructure to deal with the oil spill.”

WWF-Canada said they chose to create a community spill response plan for Resolute in part because it is along the Northwest Passage, but also because Amagoalik and the community HTA were so responsive to the project.

“This is my land, this is the area I grew up in … there is a concern about an oil spill on our hunting grounds,” Amagoalik said. “Our whole front yard is a migration route for whales at certain times of the year. Any oil spill around our area would be a real big concern.”

Staff from the Canadian Coast Guard, the Department of Fisheries and Oceans, Transport Canada, and Environment and Climate Change Canada visited the community with WWF-Canada and also met with the Resolute hamlet council, the hunters and trappers association and the community conservation officer, and held a community gathering.

Nuka Research, a company that has drafted spill response and prevention plans in Alaska and B.C., will draft a plan for Resolute.

But Amagoalik said it could be a few years before the plan is ready and people are trained. Until then, all the community can do is report the spill and wait for help.

“We just have to report it and then go from there. Taima,” he said, meaning “that’s all” or “enough” in Inuktitut.

“Preparing the first responders is everybody’s priority right now,” he said, adding that the new community spill response plans will be integrated into larger regional and national plans.

“The community wants to know what is traversing their waters, what types of ships they are, what they are carrying, what fuel they are using and they want advance notice of any activity,” he said. “That information is lacking … people just don’t know what’s transiting their waters.”

To give community members an idea of what shipping traffic looks like around their home, Dumbrille said WWF-Canada showed residents maps of ship traffic and routes from the 2016 season.

And, according to the coast guard, in the 2017 shipping season, 191 vessels—including research, cargo and fishing vessels, as well as cruise ships and tankers—conducted 385 voyages in Arctic waters. Of those, 51 vessels travelled around Resolute.

Also at the community meetings, residents made it clear that they need to be trained in how to respond to a spill, and that equipment maintenance should create community-based employment, Dumbrille said.

The new draft plan will cover ways to protect wildlife migration and community hunting areas; to protect marine mammals, the plan could suggest rerouting or “no-go” zones for ships during certain times of the year.

Should a spill take place, community members could be involved by setting up land-based response stations, ferrying responders to a site, hosting visiting experts, or deploying booms and absorbents.

Dumbrille said WWF-Canada will return to Resolute in the fall with a draft of the community oil-spill response and prevention plan.