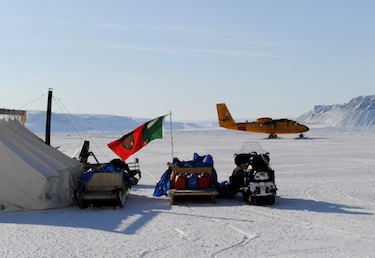 This year’s Operation Nunalivut will see more than 120 members of the Canadian forces, including about 35 Rangers, fan out from operation headquarters in four patrols. Three of these will cover the northwestern portion of the islands.

Isachsen, a remote Arctic research-weather station named after the Norwegian explorer of the Arctic, Gunnar Isachsen, on the western shore of Ellef Ringnes Island in the Sverdrup Islands in Nunavut will be most northerly destination, covered by two overland patrols.

Another group will travel to Mould Bay in the Northwest Territories at the western extent of the High Arctic islands. This group will travel by air, using Twin Otter aircraft, and survey the state of infrastructure in the area.

Canadian Rangers will serve as guides and mentors for regular Canadian Forces men and women on each of the patrols, according to Joint Task Force North, which is responsible for Canadian Forces’ Northern operations. These Northern residents are highly skilled reservists experienced in Arctic survival on the lands patrolled.

“Canadian Rangers from across the three territories will participate in this operation,” said Capt. Sandra Lévesque, public affairs officer with the task force. “We try to involve all of them, so they get an idea of what it looks like in the other territories, and share their knowledge and skills with other Rangers.”

At least eight Rangers will take part in each of the four patrols. In addition to the two groups headed to the northwestern limits of the Arctic islands, a fourth group will patrol closer to Resolute Bay. These will circle Cornwallis Island before moving on to Devon Island, where they will check equipment set up in during a diving exercise in last year’s Nunalivut operation, Lévesque said.

Forces personnel will be supported by an “ice advisor” from Environment Canada, who will use satellite data to provide updates on the state of sea ice. The campaign is also focused on gathering information on the terrain of the lands patrolled, which involves “a team effort with other governmental organizations,” Lévesque said.

“Joint Task Force (North) needs to be prepared to respond to calls for assistance for any emergencies on the land or at sea,” Brigadier-General Guy Hamel, Commander of JTFN, said in a news release. “Operation Nunalivut 2013 provides the perfect opportunity to test the capabilities that will allow us to deploy rapidly and effectively in response to tomorrow’s safety and security challenges.”

Royal Canadian Air Force CC-135 Twin Otter aircraft will be used in surveillance and reconnaissance in this year’s operation, as well as fly personnel and supplies for the patrols.

A closing ceremony and parade will mark the end of the operation at Task Force Nunalivut Headquarters in Resolute Bay on April 24.