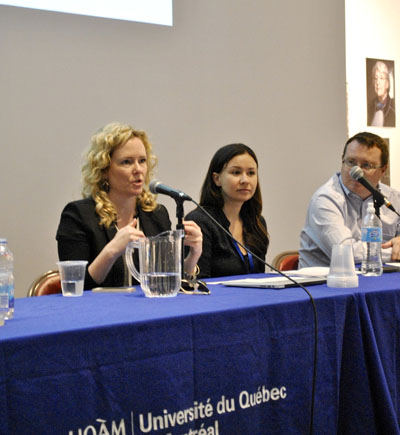 Allison Crawford of the University of Toronto chairs a panel on historical trauma in indigenous societies at an international conference on suicide prevention, June 18 in Montreal, as researchers Amy Bombay of Dalhousie University and Gerald McKinley of Western University await questions. (PHOTO BY PETER VARGA) 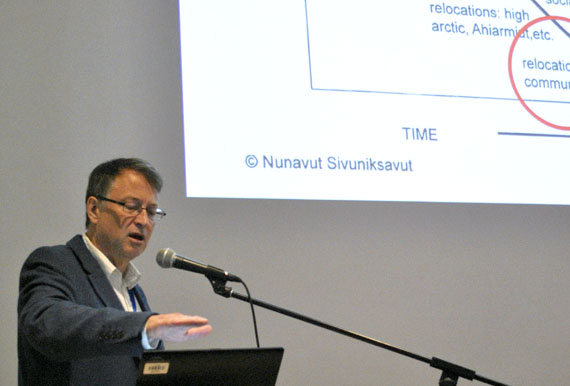 Jack Hicks, a former suicide-prevention advisor for Nunavut, describes research on the rise of Inuit suicide rates in the North at an international conference on suicide prevention held June 18 in Montreal. (PHOTO BY PETER VARGA)

MONTREAL — As in Greenland, Nunavut’s alarming suicide rate among Inuit — now 10 times the Canadian national average — is the reverse of what historical records show for the 1920s, 1930s and 1940s, says researcher Jack Hicks, a former suicide-prevention advisor for the territory.

As co-chair of a panel on historical trauma in indigenous societies at the International Association for Suicide Prevention’s 28th congress in Montreal, June 18, Hicks presented evidence that shows suicide rates among the Inuit of Nunavut began steadily growing towards their current record levels after about 1970.

His evidence lines up with a body of research that traces the causes of suicide in Nunavut to painful upheavals — or “historical trauma” — within Inuit society as it shifted from traditional hunting and gathering on the land to a wage-based economy during the past century.

Hicks’ research uncovered RCMP files from the early 20th century, which reported that only 25 Inuit took their own lives in the Northwest Territories during the 25-year period between 1920 and 1945.

“The police records align with [Inuit] oral histories,” Hicks said. “Suicides happened once in a great while.”

The turning point in the suicide record came around 1970, after upheavals brought on by “disruptions of Inuit society, as white people began to arrive,” Hicks said.

“The real shock came with the relocation into settled communities.”

Other shocks included the establishment of residential schools, which took children from their families, the introduction of police, the Canadian justice system, and the wage economy, which caused Inuit to lose their traditional lifestyle.

The aftershocks of these upheavals are still felt today, Hicks said, in the astonishing suicide rate that is more than 110 per 100,000 Nunavut Inuit this decade, up from just 10 per 100,000 Inuit in the early 1970s.

Unlike now, at the start of the 20th century, most of the deaths by suicide resulted from physical or psychological pain that in our times would “be relatively easily treated by a community health centre,” Hicks said.

Blindness, for example—or other ailments that could prevent Inuit from contributing to their families or cause them to become a burden—would compel them to take their own lives.

“If you were an Inuk on the land in 1920, and you suddenly became blind, that was huge,” Hicks said. “You were a huge drain on your family. You could no longer contribute.”

Suicide among able-bodied youth at that time was practically unheard of.

But this decade, young Inuit men and boys aged 15 to 24 are the greatest risk. Suicide rates for male youth in that age group are about 500 per 100,000, Hicks said.

Hicks pointed to a similar story in Greenland. Statistics there show suicides among young indigenous Greenlandic males, aged 15 to 29, also began to rise in the 1970s.

Males born in the 1950s, when “the Danish state set out to modernize Greenlanders to be proper Danes,” were the first to show elevated levels of death by suicide, he said.

Hicks helped create the Nunavut strategy as an advisor for the territorial government.

“Among our conclusions was that understanding the trauma history of Nunavut—and how it’s being transmitted from generation to generation—is essential to trying to break its transmission,” he said.

“We put a strong focus on well-being of children, and the role of government.”

The Government of Nunavut launched the suicide prevention strategy in 2011.

But that strategy hasn’t prompted any significant results. Nunavut’s worst year for suicides occurred in 2013, when 45 Inuit took their own lives.

Reversing the trend is a big challenge, Hicks admitted.

“Nunavut today has a whole host of social problems, and extremely tough living conditions for many families,” he said.

Those tough conditions include housing shortages, food insecurity, lack of mental health services, and an education system that doesn’t measure up to national standards.

“Unfortunately the Nunavut leadership—both the politicians and the very well-paid senior government officials—have not yet demonstrated the capacity to tackle what’s been happening in Nunavut.”

“Canada is one of the few developed nations that does not have a national suicide prevention strategy,” she said, adding the country “absolutely” needs one.

“There would be a clear commitment [including funding] from the federal level down, and there would be accountability,” she said.

The Canadian government took a first step to creating a national strategy in December 2012, when it passed the Federal Framework for Suicide Prevention Act.

The government hasn’t pushed any further to create a strategy since then.