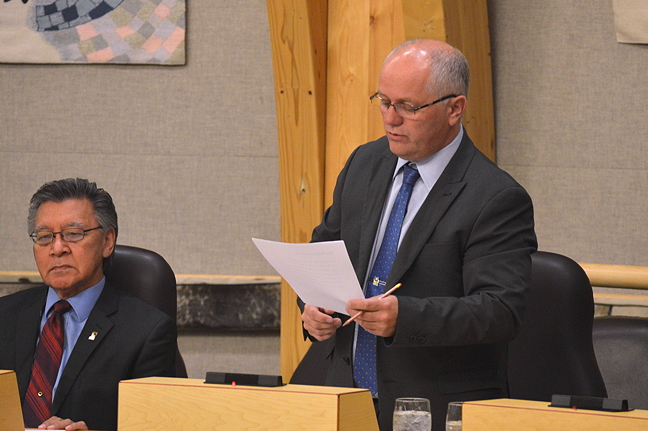 Nunavut’s department of community and government services says it is still looking for a long-term solution—and cause—for the high levels of sodium discovered in Sanikiluaq’s drinking water this past summer.

CGS minister Joe Savikataaq told members of Nunavut’s legislative assembly Oct. 21 that his department will find a “reasonable, not financially too burdensome and practical” solution to resolving the crises.

Savikataaq’s statement was in response to questions from Hudson Bay MLA Allan Rumbolt, who asked the minister if CGS would consider constructing a new water treatment plant or upgrading the current facility on the island hamlet of roughly 800 people.

“We will come up with a solution as to how they can have safe drinking water and we haven’t narrowed it down to a water treatment plant,” Savikataaq said.

“We are also aware that there is limited water supply for Sanikiluaq so all options are being looked at.”

In June, Nunavut health officials told residents of Sanikiluaq to avoid drinking the community’s tap water due to high concentrations of sodium.

High sodium intake can have adverse effects on people with potentially weakened immune systems, such as infants or elders, or people with high blood pressure.

“Reverse osmosis filters” were eventually installed in most homes in the community, Savikataaq explained, adding that—while a short-term solution—the filters will eventually need to be replaced.

Savikataaq expects that will need to happen once a year with the bulk of the filters replaced by the community’s housing authority.

“People who own their own house, we will build a system if not completely do it for them because the number of resident housing on Sanikiluaq is small compared to the number of people in public housing,” he said.

The cause of the sodium levels remains a mystery, Savikataaq told MLAs

“As of right now, we are not sure why the sodium levels have gone up when its been the same source of drinking water for many, many years,” he said.

Savikataaq promised to inform the legislature as soon as the final analysis of the data is completed.

Rumbolt said he was grateful to the various responders that aided his community during the initial days of the crises, including Community and Government Services, Sanikiluaq municipal staff and community volunteers, as well as Calm Air for flying bottled water into the hamlet.