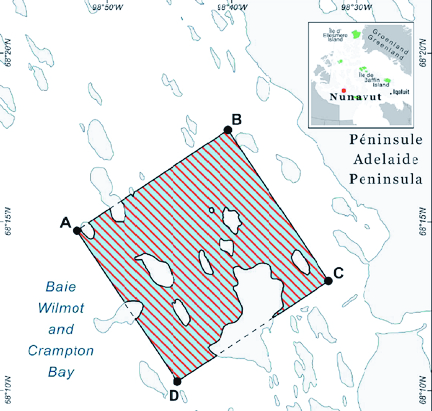 A map showing the boundary of the Wrecks of the HMS Erebus and HMS Terror National Historic Site of Canada. The HMS Terror was found well outside the boundary, further north, in Terror Bay. (PARKS CANADA MAP) 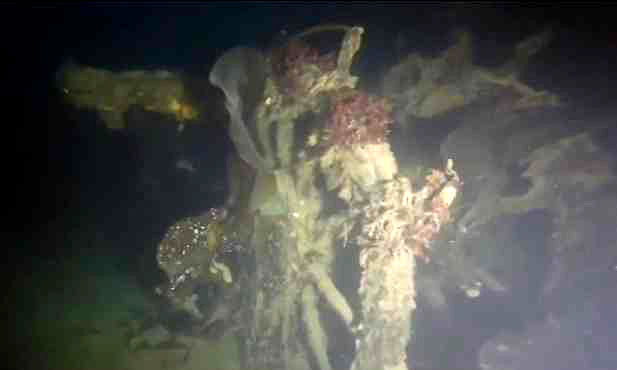 The 169-year-old mystery of Sir John Franklin’s doomed Arctic expedition got closer to being solved Sept. 3 with the long-anticipated discovery of the British explorer’s second ship, HMS Terror, in Nunavut.

Writer Paul Watson, in an article appearing in The Guardian Sept. 12, confirmed researchers aboard the Arctic Research Foundation’s research vessel, the Martin Bergmann, discovered the Terror, fittingly, in Terror Bay, located on the southwest shore of King William Island, nine days ago.

The Guardian reports the Terror was found in “pristine shape” with her masts broken but still standing with nearly all the hatches on the vessel closed and containing a trove of valuable historical artifacts.

Many of the geographical features surrounding King William Island, including both Terror and Erebus Bay, were named in honour of Franklin’s doomed expedition by the dozens of expeditions sent searching for clues of his fate in the mid-19th century. So the fact the Terror ship was found there was mere coincidence.

The discovery comes almost two years to the day since Parks Canada divers located the Terror’s sister-ship, the HMS Erebus, in the shallow waters of Queen Maud Gulf.

In an email to Nunatsiaq News, a Parks Canada spokesperson said the federal department was “excited about the reports of the discovery of the wreck of the HMS Terror” and is currently working “with our partners” to validate the details of the discovery.

“The discovery of the HMS Terror would be important for Canada, reflecting the ongoing and valuable role of Inuit traditional knowledge in the search and making a significant contribution to completing the Franklin story,” the email said.

But the location of the Terror may raise more questions than it answers.

The Terror’s final resting place is nearly 100 kilometres away from the established search grid released by Parks Canada for its 2016 expedition in the Victoria Strait.

It’s also well outside the 10-km by 10-km Wrecks of the HMS Erebus and HMS Terror National Historic Site of Canada boundary that the federal government established last April.

According to The Guardian, the Martin Bergmann took an unscheduled detour from the planned search grid after getting a tip from Inuk crewman Sammy Kogvik, from Gjoa Haven, who said he discovered a “large piece of wood” in Terror Bay while on a hunting trip six years earlier.

Kogvik’s tip is the latest in a long string of Inuit testimony that has been crucial to determining the fate of Franklin’s crew.

Louie Kamookak, a Franklin historian from Gjoa Haven, says he was aware of Kogvik’s hunting story for years and was happy an Inuk contributed to finding the Terror.

“It shows that the Inuit, we live here,” he told Nunatsiaq News from his home. “It’s good that someone shared the information that led to the finding of the ships. We have two ships now.”

Kamookak said Kogvik’s account is one of several modern testimonies suggesting the Terror would be found in Terror Bay.

“I believe a lot of people approached Parks Canada about the possibility of a ship in Terror Bay but I don’t think they really took it seriously,” he said. “There’s a lot of modern information of a ship being seen there, under the water, from hunters and also from airplanes.”

Kamookak said a passenger, on an aircraft from Gjoa Haven to Cambridge Bay, saw the outlines of a ship in Terror Bay as they were flying overhead.

According to The Guardian article, the Terror rests about 24 metres below the surface of Terror Bay, which could make such a sighting from air possible.

David Woodman, who wrote Unraveling the Franklin Mystery: Inuit Testimony in 1991, told Nunatsiaq News that the discovery is wonderful, but surprising.

“Its fantastic news. I can’t wait to find out exactly and what they find in the future,” Woodman said.

“My mind is reeling with the implications.”

Undoubtedly, historians will have re-think their ideas about the final fate of Franklin’s crew, beginning today.

That’s in part because the wreck of the Erebus, and now the Terror, are in dramatically different locations from their last-recorded positions in Victoria Strait.

Those positions were recorded on the margins of a standardized British Navy note left by Franklin officers and discovered in a cairn on King William Island in 1859.

In that note, dated April 25, 1848, commanding officers wrote that all remaining 105 crew members were abandoning the ships, which had been “beset by ice” since 1846 north-northwest of King William Island.

The note said the remaining crew was heading south for the Back River and onwards to the nearest Hudson Bay Co. trading post.

But Woodman says the location of both wrecks confirms that life continued for at least some of the Franklin survivors beyond that 1848 note.

“The major point is the ships were remanned, there’s no way [the Terror] would have gone into Simpson Strait and tucked itself into Terror Bay by normal ice flow.”

The same is true for the Erebus, Woodman says, which was discovered in a shallow region of Queen Maud Gulf, surrounded by islands, that would make drifting naturally into that area unlikely.

The timeframe for other existing evidence, such as cannibalized bones found on King William Island, along with existing Inuit testimony that confirms Inuit contacted Franklin crew members while they were still on the ships, will need to be reexamined.

“There are so many ways to fit these pieces together,” Woodman said, but added that surviving Inuit oral history is crucial to understanding the timeline of the Franklin crew.

“The pieces are correct, they show proper images it’s just the sequence and the narrative you can draw between them has to be figured out.”

Read more on the discovery of the Terror, as it develops, on Nunatsiaq News.