“Many of these people are no longer around, but their spirit lives on” 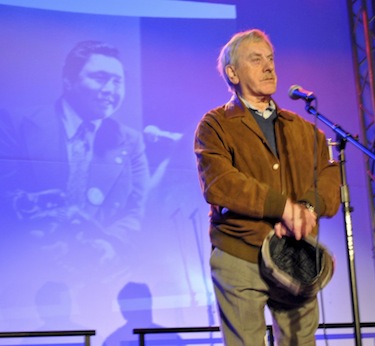 When Bryan Pearson first conceived the idea of a spring festival for Frobisher Bay as mayor of the community in 1964, an important element of the plan was to promote the Arctic hamlet by inviting high-profile guests to take the role of Honorary Toonik.

The strategy paid off, and on opening night of the 50th festival in the City of Iqaluit, April 2, Toonik Tyme Society president Travis Cooper returned the honour to Pearson himself.

Cooper presented Pearson with a sealskin hat and bow tie for the occasion, and invited the former local and territorial politician, and Iqaluit entrepreneur to speak.

“Fifty years sounds like a long time, but it’s gone by very quickly,” Pearson told a capacity audience at the city’s curling rink.

“Toonik Tyme, when we originally planned it, was a hell of a lot smaller than it is now. We felt at the time that we needed to put this community on the map.”

Frobisher Bay has since become Iqaluit, the capital of Nunavut. A quick survey by the master of ceremonies for the opening festivities, Joanasie Akumalik, confirmed that Nunavummiut and Canadians from all over the country had travelled to Iqaluit for the 50th festival.

“Times have changed. This community has grown into a successful metropolis,” Pearson said, adding that he was happy to see that the popular festival has grown with it.

As images from past festivals flashed on a screen behind him, Pearson extended greetings from the former commissioner of the Northwest Territories, Stuart Hodgson, “who I spoke to today, for his 91st birthday,” he said.

Hodgson himself was one of three commissioners who served as an honorary Toonik, before Nunavut emerged from the Northwest Territories.

Pearson, who was also MLA for the Northwest Territories’ Eastern Arctic constituency in the 1970s, recalled Hodgson advocated the need to divide the territory “to enable the Inuit to take care of their own affairs in the east,” Pearson said.

“We’ve achieved what he set out to do,” he said.

The festival’s first Honorary Toonik was John Diefenbaker, who had served as prime minister of Canada and was leader of the opposition to the government when he came to Frobisher Bay for the first festival.

Frobisher Bay was then a hamlet of 2,000 residents. Among the community’s Inuit leaders who helped plan Toonik Tyme’s first festivals were Simonie Michael, Joe Tikivik, Simonie Alainga, and Abe Okpik.

“Simonie Michael and Joe Tikivik created the most amazing sight that we ever saw, and that was the Toonik himself,” Pearson said.

A man named Atsialak played the character as a sort of festival mascot, dressed in caribou hides and a mask.

Pearson recalled after his speech that Michael and Tikivik secretly created the character to put on a big surprise in the middle of the first festival.

One busy day, as activities carried on around Toonik Lake, a large figure suddenly emerged from a snow bank at the edge of the site.

“It was just an incredible theatrical moment,” Pearson recalled. “He suddenly popped out. And I was totally, totally shocked. Because I had absolutely no idea.”

Children ran after the Toonik, but couldn’t catch him, and in a matter of minutes he disappeared again.

“He’d gone back in the bloody hole again. It was a couple of days before we caught on to what it was,” Pearson laughed.

“Alas, so many of these people are no longer around, but their spirit lives on,” Pearson said in his April 2 speech.

The festival’s owes its continued success to volunteer organizers, he said, calling attention to the Toonik Tyme Society’s most recent president, Travis Cooper.

“This young man here has done a tremendous job keeping Toonik Tyme alive,” Pearson said. “I am so pleased that there are people in the community who are willing to stick their neck out, and volunteer to do these things, for the good of everybody else.”

Cooper took up the chair’s position on the Toonik Tyme board last year. With an eye to this year’s 50th anniversary, he and board members expanded on the festival’s traditional activities, and kept most activities free of charge.

Festival followers can keep on top of schedules, and any changes to events that are weather-dependent on the festival’s new website, Twitter feed, and Facebook page.