“The sooner we receive the complaints, it’s a lot easier for us to do our job” 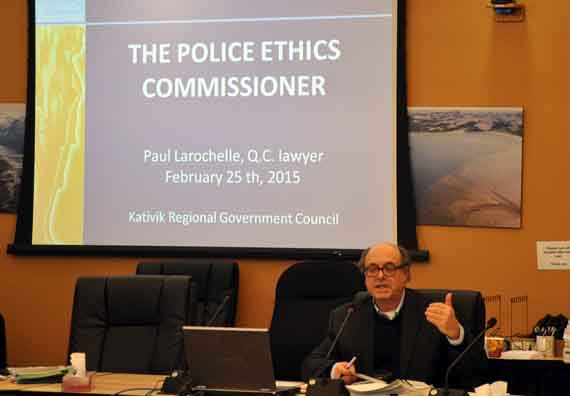 KUUJJUAQ — Quebec’s police ethics commissioner received 10 complaints from Nunavimmiut over the last year, a number that the office says is about average for the last few years.

But that number could rise following the commissioner’s first visit to the region in 25 years.

Quebec’s police ethics commissioner Paul Larochelle attended a meeting of the Kativik Regional Government council Feb. 25 to respond to a number of questions and concerns from regional leaders on the troubling number of police altercations they say are happening in their communities.

The commissioner heads an independent office which processes civilian complaints regarding police conduct across the province — about 1,700 a year.

Nunavimmiut who feel like they’ve been treated unfairly by a police officer can fill out a form any time within a year of the incident.

“The sooner we receive the complaints, it’s a lot easier for us to do our job,” Larochelle told KRG councillors. “And it’s very important to know how and where to reach you.”

The complaint form can be filled out by anyone who experienced or witnessed the alleged mistreatment, he added, and should include a description of the incident and the identification of the officer, if possible.

Complaint forms are available in every community, in Inuktitut, at local Kativik Regional Police Force stations.

But as Salluit councillor Putulik Papigatuk pointed out that “a person will never complain at the police station.”

That’s why the KRG has committed to making the forms available at municipal and local employment offices as well.

Of all provincial complaints sent to the ethics commissioner, about 60 per cent make it through the preliminary investigation, Larochelle said; roughly the same percentage for complaints coming from Nunavik.

“If after the investigation we have enough evidence, it will go to the deontology [ethics] committee,” Larochelle said.

That committee reviews the evidence. About 60 per cent of cases that reach the committee will lead to sanctions against the officer, Larochelle said. “If it’s substantiated, it will go before the court,” he said.

Some cases are referred to mediation, although Larochelle said this is logistically difficult for complaints made in Nunavik, because his office does not have staff based in the region.

Larochelle’s visit to Nunavik won’t lead to any immediate changes in the complaints process but he noted that “being here has really helped me see the reality of the region.”

Regional meetings in Nunavik often include discussions on the sometimes troubled relationship between Inuit and police officers, mainly southern recruits posted in the region’s communities.

“There are community members who’ve been mistreated by police,” said Quaqtaq councillor Eva Deer, who provides support to Nunavimmiut inmates in federal penitentiaries.

“It’s the first time I hear of there being a commissioner, so that’s good.”

Apart from local police and municipal offices, Nunavimmiut who want to file a complaint to Quebec’s police ethics commissioner can obtain a form online here or by calling toll-free at 1-877-237-7897.

Police forces also have an internal process to deal with misconduct: the KRPF has a disciplinary committee made up of civilian representatives who can rule on the conduct of its staff.

Three complaints have gone through this committee in the past, the KRPF has said, resulting in the dismissal of two officers, including its deputy chief of operations this past week.

In more serious cases, such as when a citizen reports they were beaten by an officer, police are investigated by an outside force — usually the Sûreté du Québec. They pass their findings along to a Quebec Crown prosecutor who then must decide whether to lay charges.