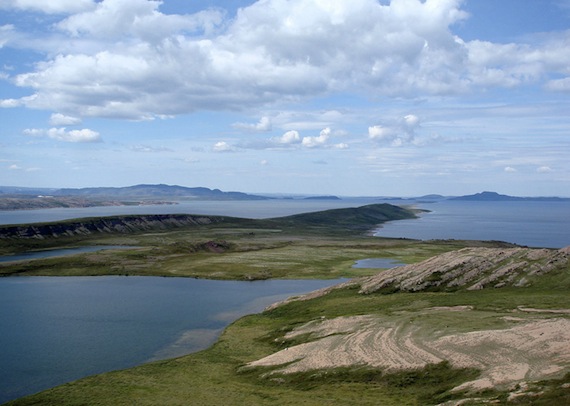 A view of Bathurst Inlet in the Kitikmeot region. The Bathurst caribou herd’s range lies to the west of this area. (FILE PHOTO)

I would like to share this with all of you as I think that being informed is the best thing we can do.

My company works with two hunters and trapper organizations in the Kitikmeot to offer non-resident hunts for caribou and muskox.

We realize the importance of caribou to all Inuit and peoples of the North. Concern over caribou numbers in the north are valid; however there is some information that is very important to the discussion on the harvest of Bathurst caribou and specifically the Bathurst herd that we feel is not being considered or given proper weight.

By all accounts and even though the number might be argued, there remains (even by the most conservative estimate) at least 20,000 Bathurst caribou. Many accounts will show the Bathurst herd declining from a peak of 350,000 caribou.

We feel it must be pointed out that this was at a time when the herd range was two-thirds larger than what is defined now as the Bathurst range and before the creation of the Ahiak and the Bluenose East caribou herds.

This is therefore a bit misleading. However, for the purpose of this discussion we will agree that there are only 20,000 caribou using the area immediately west of Bathurst Inlet as their calving ground and this is the caribou we are now discussing.

The total allowable harvest of Bathurst caribou for many years has been traditionally 100 per cent males only and consists of historically 70 to 100 caribou bulls. This is due to the isolation of the caribou. No Inuit communities now harvest from the Bathurst herd.

Thus a “unofficial” TAH of 70 to 100 male caribou only has been in place on the Bathurst herd for many years.

The harvest allows guides from Bathurst, Umingmaktok and Kugluktuk opportunities to get their winter supply of fat caribou meat (while getting paid for it) and they are hunting in an area that is very remote and where other harvesting does not typically occur.

Here is a link to a harvest report of herds in Alaska where not only people but predators harvest from caribou herds.

In this report, you will see clearly that harvesting is allowed on herds of a similar size. In the case of the Nelchina caribou herd estimated at 40,000 caribou, a harvest of 2,300 annually is recommended. For the Forty Mile herd, which was at 22,000 caribou a harvest of 800 was recommended.

In addition in Alaska, the harvest plan for the Forty Mile caribou herd that lives in Alaska and Canada can be used as a good comparison. It too was once said to be over 200,000 animals and it dropped to a low of 20,000 animals.

It is very interesting to note that at the time it was at a low of 20,000 animals a harvest of 150 bulls only was implemented. Another fact that seems to be greatly overlooked is the harvest of these 70 to 100 bull caribou to the overall herd health.

Predators and primarily wolves live off caribou. All estimates state that a individual wolf will require 15 to 30 caribou per wolf per year to sustain itself and their harvest is not specific to sex or age.

Therefore one of the direct benefits of the sport hunt harvest is the saving of 180 to 360 caribou annually.

The fact above seems to be missed by both the Nunavut Wildlife Management Board and the GN in its recommendations. Why would what is perhaps the single biggest management tool for the recovery of the Bathurst caribou herd not be illuminated?

Many jurisdictions spend thousands of dollars on wolf reductions and it is still proven to be the most effective method to help species in trouble to recover. This is supported by the fact that even today in B.C., Alaska, Alberta and the NWT incentives if not outright reduction of wolves is still practiced often at the great expense of the taxpayer.

The two HTOs are saving the taxpayer thousands of dollars but more importantly they are saving caribou and helping the recovery of the herd.

To recap, if the BHTO and UHTO were now able to continue the offering of hunts to clients the net benefit to the Bathurst caribou herd would be a loss of 180 and 360 caribou per year. This would effectively be the opposite result that management objectives are trying to achieve.

These two HTO’s are proving to be a major tool in the protection and growth of the Bathurst herd. Not in the decline.

The other economic benefits to Inuit are employment and being able to take home enough food to feed their families for the winter. In addition meat is given to elders, single families and others in need.

In closing we would like to assure the people of Nunavut and the GN that due to the remoteness of the Bathurst caribou herd, the current harvest of 70 to 100 males only and the benefit of the two HTO operations and the harvesting of wolves there is a very effective management plan in place already and policies (although not official) are in place to help the Bathurst herd recover in strength. Indeed changes could actually be detrimental to the herd’s recovery.