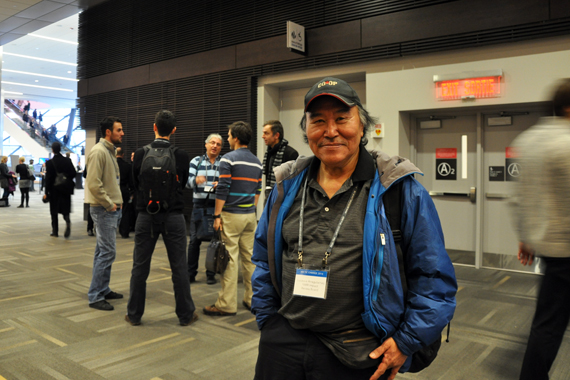 Lucassie Arragutainaq, the manager of Sanikiluaq’s hunters and trappers organization, said he sees a growing interest around what’s happening in the marine environment in Hudson Bay, from the community and beyond. (PHOTO BY SARAH ROGERS) 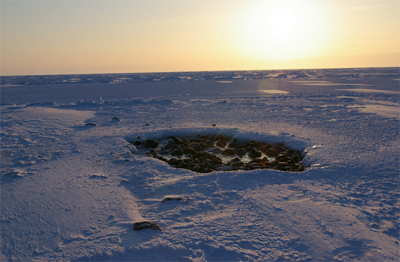 Eider ducks gather around a hole in the sea ice on Hudson Bay, where they dive in to harvest sea urchins. (ARCTIC EIDER SOCIETY PHOTO)

OTTAWA — When the documentary film, “People of a Feather,” came out in 2012, its goal was to spur more research and action on the sea ice habitat in Hudson Bay.

Two years and 16 film awards later, it’s doing just that — and more, as Sanikiluaq prepares to re-open its eiderdown factory.

That eiderdown factory operated for about 20 years until the late 1990s, when the eider duck population dropped.

The hamlet is now in the process of renovating the facility — which could open as soon as March 2015 — say those involved with the film, who presented at this week’s Arctic Change 2014 conference in Ottawa.

And Lucassie Arragutainaq, the manager of Sanikiluaq’s hunters and trappers organization, said he sees a growing interest in what’s happening in the marine environment in Hudson Bay, from the community and beyond.

“[People of a Feather] has been really good in terms of getting that information out there,” he said. “And that’s just one of many species we Inuit rely on, there are lots of others, like seals and belugas.”

The feature-length documentary produced by biologist Joel Heath and the community of Sanikiluaq looked at the challenges that starving eider ducks face in adapting to changing sea ice conditions in the Belcher Islands.

At the Arctic Change 2014 conference, Heath said researchers and people in the community have used the film’s momentum to put in place community-based monitoring projects in Sanikiluaq and other communities along eastern Hudson Bay.

“What we’re working on now is looking at the conditions affecting the birds’ ability to get through the winter,” Heath said Dec. 10.

The eider ducks, whose population dropped by 75 per cent in the late 1990s, are stable for now, Heath said — there hasn’t been any significant drop in the local population since 2008.

Hunters and researchers say that changes in the sea ice have allowed polar bears to access the islands where the eider ducks nest. A single polar bear can digest an entire colony’s future offspring.

But ongoing research and monitoring will help reveal more about the eider ducks well-being, and that of other local wildlife.

The Arctic Eider Society, which formed as a legacy project to Heath’s documentary, is helping continue educational and monitoring programs in both Nunavut and more recently, Nunavik.

The problem of starving eider ducks — according to Heath and Inuit in the region —- results from the load of fresh water coming into Hudson Bay during the winter, as hydroelectric projects further to the south release water to generate power.

Fresh water in the system causes ice to freeze faster over top of sea ice, essentially blocking the eider ducks’ access to holes in sea ice that they dive through to catch sea urchins.

So in Sanikiluaq, a handful of hunters work as local monitors; when travelling out on the sea ice, they use salinity tests to sample the water, acoustic profilers to measure the speed of currents and time lapse photography equipment to document the changing ice.

Heath is now expanding that research into other Hudson Bay communities: the Nunavik Marine Region Wildlife Board has provided money to pay for monitors in Nunavik’s Hudson coast communities.

The Arctic Eider Society is also working with Google Earth to launch an interactive knowledge mapping platform, Heath said, which will make traditional knowledge and near real-time results accessible to the public through an online interface.

That program was shortlisted for this year’s $1 million Arctic Inspiration prize.