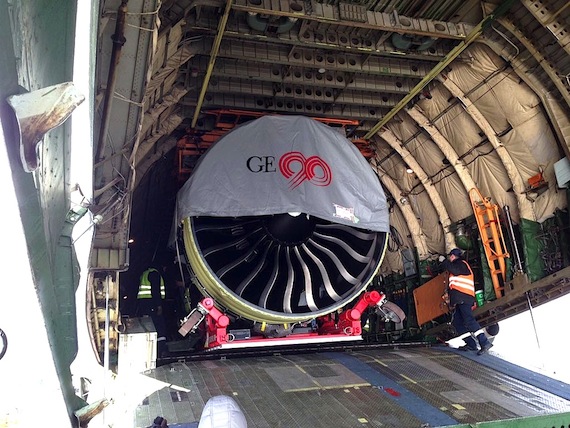 This photo posted on Twitter by Michael Ettlin from Zurich shows the engine that arrived Feb. 4 in Iqaluit for the Swiss International Airlines Boeing 777-300 there since Feb. 1. (PHOTO/TWITTER) 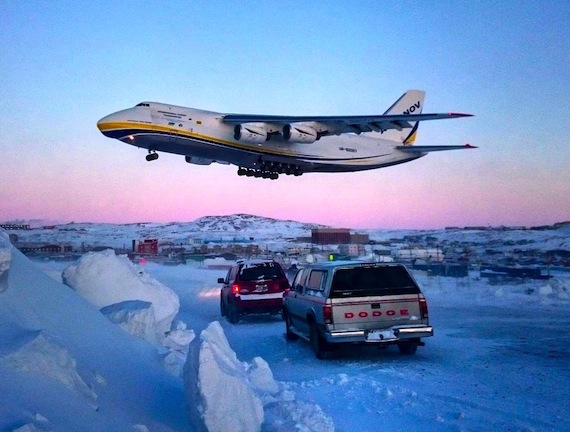 Antonov to the rescue! The huge four-engine aircraft lands at 3:30 p.m. Feb. 4 in Iqaluit, with a new engine for the Swiss International Airlines Boeing 777-300, as many plane-spotters gather, in their vehicles, at the end of the runway to catch the landing. (PHOTO BY MIALI BUSCEMI)

Here’s a sight you don’t see often at the Iqaluit airport: a giant Antonov 124, one of the biggest heavy-lift aircraft ever built.

That’s what many Iqaluit plane-spotters wanted to see Feb. 4, when they gathered at the end of the airport’s runway at 3:30 p.m. just before sunset turned the snow pink and deep purple—and despite a windchill of -46 C.

Many others watched the Antonov 124 land from the comfort of their homes: “One of the largest planes in the world just flew by my living room window,” said an Iqaluit man on Twitter. “Impressive!”

A similar Antonov last landed in Iqaluit in April 2015 when it brought in replacement turbines for Pangnirtung’s failed power plant.

This time the Antonov 124, a four-engine aircraft owned by Antonov Co., a Ukrainian aircraft manufacturing and services company, was on a new mission: the aircraft flew from Zurich, a trip of more than 4,000 kilometres, with a new engine for the disabled Swiss International Airlines Boeing 777-300.

You can see the Feb. 4 landing for yourself here in a video posted on YouTube by Iqaluit’s Brian Tattuinee.

A single engine, according to online aviation sites, costs about $24 million.

The Swiss aircraft, flight 40, en route from Zurich to Los Angeles, saw one of its two engines shut down Feb. 1 and then successfully made an emergency landing at the Iqaluit airport.

The Boeing 777-300, which carried more than 200 passengers and crew, is still on the tarmac in Iqaluit, although everyone on board left Feb. 2 for New York City on another Swiss International aircraft.

The 777’s new engine was no light load to bring to Iqaluit. The engine is so large that it’s about the same diameter as the fuselage of the Boeing 737s that northern airlines fly in Canada.

Each 777 engine, made by General Electric, provides 111,000 units of horsepower, making the engine more than a 1,000 times more powerful than a car.

And, as the 777 is equipped with two engines, each one is supposed to but ultra-reliable.

But it’s not the first time this year that Boeing 777 aircraft have suffered problems with these engines. On Dec. 31 an All Nippon Airways Boeing 777-300 flying from Frankfurt to Tokyo had to make an emergency landing, due to the loss of an engine, at Russia’s Krasnojarsk airport.

The Swiss International jet is likely to remain in Iqaluit for several weeks as a team carries out the repairs.

Fuhlrott said she couldn’t confirm how many people would be involved in the repairs or how long the repairs would require, due to the “adverse conditions.”

There is no hangar to protect workers, so until a tent of some kind is put up, all work on the aircraft will be done outside, in some of the coldest weather Iqaluit sees all year.

Flight 40 passenger Judith Conrady, writing about her experience for the German online news site RP, described how the pilot said, “I am sorry to wake you up. We are about halfway between Zurich and Los Angeles. We have to land at the nearest airport. Because of a technical problem. The nearest airport, Iqaluit, is located in the top north of Canada.”

When the aircraft landed in Iqaluit, everyone applauded, Conrady said.

The thought of getting off the aircraft was tempting, she said, but then the temperature dropped and darkness fell.

The passengers were remarkably quiet, she said, and some were even in a good mood despite the inconvenience: “This is probably due to the fact that the situation was so absurd that one could not help but accept it.”

The switch to the second aircraft sent to take the passengers on was complex, as Conrady described it: after the plane’s arrival at about 2 a.m. Feb. 2, two aircraft stairs had to be set up so they could head down into five heated school buses. Then the stairs—and the buses—were pulled up to the new aircraft, which took them on to their way to JFK International Airport in New York City.

“I would have liked Iqaluit. Surely it is the city that made the most impression on me without ever having entered it,” Conrady said.

A shortage of customs agents onsite has been suggested as a reason for why those on board were unable to tour the city.

Meanwhile, Frobisher Bay Touchdown Services, which takes care of contracted ground handling in Iqaluit, scrambled to provide services to Swiss International— and to take care of puppies in the hold. They left a message for the owners: “we kept your fur babies warm, watered and fed, we went for a quick walk bathroom break as well,” assuring them that their animals had been in good hands.

Passengers, Swiss International said, will be compensated for the unexpected stop in Iqaluit and the delay—although airline spokesperson Fuhlrott did not say how. 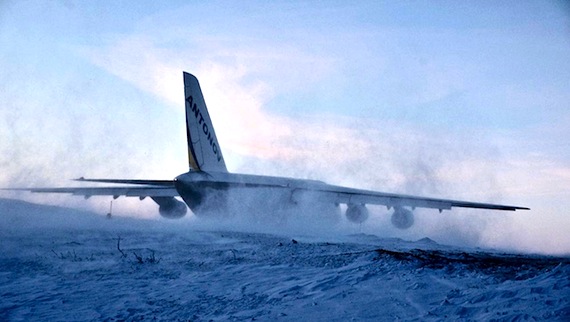 The Antonov lands in a cloud of snow Feb. 4 as it touches down, at the Iqaluit airport: Now the work starts for the repair crew on the Swiss International Airlines jet. (PHOTO BY FRANK REARDON PHOTOS)