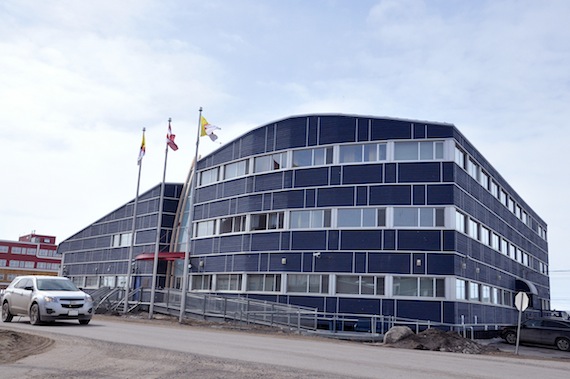 The Nunavut legislature in Iqaluit starts up again Monday, May 30, at 1:30 p.m. Members of the public are always welcome to attend. (PHOTO BY THOMAS ROHNER)

Here’s a question that many would like the Government of Nunavut to answer:How effective has the GN’s human resource division been since the government dissolved its standalone department in 2013?

That question will dominate the agenda when legislators convene in Iqaluit May 30 to begin the 2016 spring sitting of the Legislative Assembly.

The short session, which will end no later than June 8, includes a committee of MLAs who will look at four of the government’s human resource documents:

• the public service code of values and ethics; and,

Iqaluit MLA Pat Angnakak made a motion during the fall 2015 sitting for legislators to examine the four human resource documents.

Angnakak made that motion after telling fellow MLAs that the GN’s process for addressing workplace conflict and harassment is problematic.

The assembly’s senior clerk, John Quirke, told Nunatsiaq News May 27 that three days have been set aside for discussion on the human resource documents.

And speaking of harrassment and government employee relations, Nunavut’s ethics officer’s first ever annual report is expected to be tabled during this legislative session.

Ethics Officer Jeffrey Schnoor told Nunatsiaq News in October 2015 that as of that month, he had fielded 40 requests for advice and information since taking office, roughly 14 of which included references to harassment. Schnoor said he has opened 11 files involving “disclosures of wrongdoing.”

But before all that, legislators plan to first discuss one other document, Quirke said: the minister’s report on poverty reduction.

“The plan is to discuss the item on poverty reduction on May 31, which could spill over into June 1. Then the HR documents are scheduled for June 2 and June 3, which might spill over into the Monday, June 6,” Quirke said.

Government House Leader Paul Quassa’s office told Nunatsiaq News May 27 that four bills will be introduced this session, including:

• one bill on the Unlawful Property Forfeiture Act; and,

• 0ne bill on the Act to Amend the Travel and Tourism Act.

“The purpose of the proposed Unlawful Property Forfeiture Act is to enable the recovery of the proceeds of unlawful activity, as well as property use, or to be used, to facilitate unlawful activity (e.g. bootlegging and sale of illegal drugs),” Quassa’s office said.

Organizers of the one-year suicide prevention strategy, which includes the GN, said in May that the budget for that strategy will be introduced this session.

Quirke said that the language commissioner’s report on services provided by the Qikiqtani General Hospital will also be tabled; that report has already been made public.