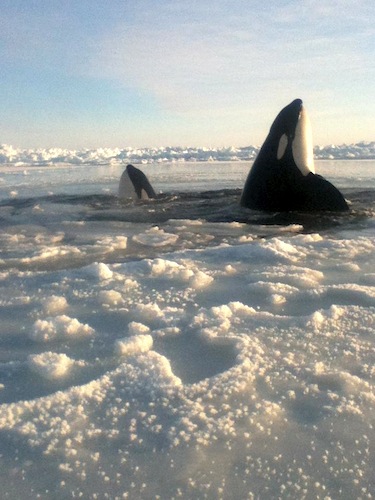 Here killer whales come up from air in a photo from Facebook, which shows an entrapped group of whales this past January outside Inukjuak. (FILE PHOTO) 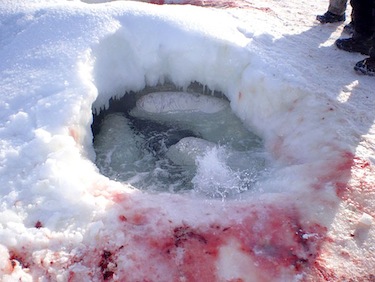 This photo shows some of the 70 belugas which were trapped in the ice near Sanikiluaq this past February. (FILE PHOTO)

Maybe it’s time to look into the link between Hydro Québec’s power production and the entrapment of marine wildlife in Hudson Bay, a researcher says.

There’s a connection between the freshwater plumes sent into Hudson Bay from the Quebec power corporation’s huge dams and the quick freezing of water in the bay which led to entrapments of eiders, beluga and killer whales this past winter, suggests Joel Heath, a biologist whose film People of the Feather about Sanikiluaq hunters and eider ducks, received acclaim.

The connection is worth studying, he said, because although entrapments occur naturally, this past winter there were at least three occurrences in southern Hudson Bay.

In February, more than 70 belugas remained trapped in two six-foot-wide breathing holes in the sea ice about 96 kilometres south of Sanikiluaq.

That entrapment, during the coldest part of the winter, corresponded “to the peak demand at Hydro Québec,” Heath told Nunatsiaq News in a recent interview.

In January, a group of killer whales were encircled by sea ice about 30 km off Inukjuak.

Heath says hunters from Sanikiluaq who were out polar bear hunting this past winter also spotted an entrapment of eider ducks in the bay.

Hydro Québec says water fresher than 25 parts per million salinity does not enter Hudson Bay, but Heath says measurements by Inuit during the winter showed extensive freshwater, of less than 15 ppm salinity, was reaching deep into Hudson Bay around the Belcher Islands.

“This winter it was the freshest we’ve seen,” Heath said.

In one inlet on the south end of the islands, the surface of the sea ice even looked more like a frozen lake than the ocean.

In winter, the marine environment of Hudson Bay is usually quite salty, at about 30 ppm, he said.

During the spring, rivers in northern Quebec used to send a lot of freshwater into the bay.

But now this water is held back in huge reservoirs behind Hydro Québec’s dams until electricity demands peak in mid-winter. When that water is released, it powers the turbines and makes more electricity, but also reverses nature’s cycle.

And, when freshwater plumes from that water flow into the bay during mid-winter instead of spring, the result is more freshwater, which freezes much quicker and at warmer temperatures than salt water.

As well, freshwater ice has a different consistency and is less flexible than salt water ice, which can change the structure of sea ice habitats, he said.

Heath’s non-profit Arctic Eider Society wants to produce a short video documenting events this past winter, and raise money for future research on wildlife entrapments and oceanography in Hudson Bay.

Heath would like to see power corporations develop new strategies for the storage and distribution of hydroelectric energy so that freshwater plumes don’t disturb the natural timing of the water cycle.