Quebec power corp. says there’s no indication the technology could be used in the near future 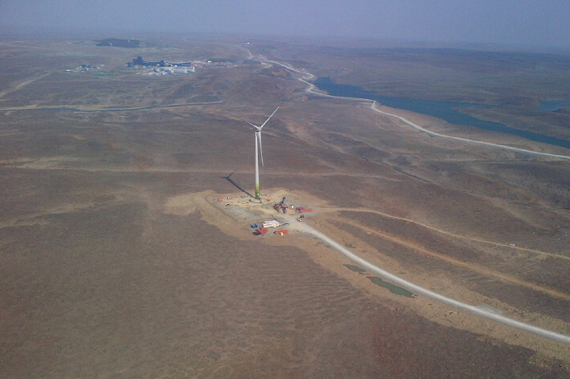 An aerial view of the 120-metre high wind turbine, located a few kilometres from the Raglan nickel mine site in Nunavik. (PHOTO COURTESY OF GLENCORE)

Hydro-Québec will not move ahead with plans for experimental wind and underwater power projects in Nunavik — for now.

The Quebec power corporation has scrapped plans for a pilot wind farm in Kangiqsualujjuaq meant to start next year, as well as an underwater generator outside of Kuujjuaq, saying neither are profitable right now.

Hydro-Québec looked at the feasibility of capturing wind power in Nunavik in 2003, and again in 2008, by measuring wind speeds around the region’s 14 communities.

Seven communities were flagged as having the capacity for wind farms.

Although it didn’t register the fastest wind speeds, Kangiqsualujjuaq was chosen for the test run, clocking an average of 23 kilometre/hour winds.

Between 2015 and 2017, the community was slated for one or more wind generators, the giant fan-like turbines that convert wind power into electricity, coupled with a diesel generator.

Akulivik, where some of the fastest wind speeds in the region were registered, was slated next.

But the cost analysis has shown the wind project is not profitable, said Hydro-Québec spokesman Gary Sutherland.

Hydro-Québec cannot reveal what the potential costs were, he added, due to a confidentiality clause with the project’s partner — the German firm Enercon.

The same project was included in the original Plan Nord launched under Jean Charest’s Liberal government in 2011.

Under the plan, Quebec proposed to develop 3,500 megawatts of renewable energy in addition to the 24,000 megawatts already generated in the North.

That also included a pilot project to set up an underwater generator in Kuujjuaq by 2012 to draw energy from water currents, which would have had a capacity of 250 kilowatts.

Sutherland said that a study on underwater depth and current speeds was conducted in the fall of 2012 in the Koksoak River.

But “there are currently no projects under way using underwater generator technology and no new developments indicate that this technology could be used by Hydro-Québec Distribution as a source of generation in the near future,” he said.

In the meantime, Nunavik’s mining industry is the only one harnessing wind power in the region, with the recent construction of a 393-foot high turbine at Glencore’s Raglan mine site, about 100 kilometres southwest of Salluit.

The three megawatt wind turbine will be coupled with a 1.8 megawatt wind energy storage device — the first of its kind in the Canadian Arctic — which should be fully operational by 2015.

The pilot project will cost about $22 million, more than half of which is being financed by the provincial and federal governments.