“I have a place in Iqaluit. I have identified it. I have my personal belongings there” 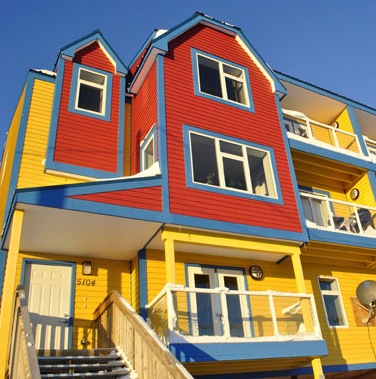 The apartment that Senator Dennis Patterson said he rents in Iqaluit, 5104A, is located in this building in the Plateau neighbourhood of Iqaluit. (PHOTO BY JIM BELL) 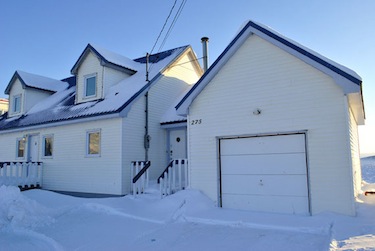 In 1987, Senator Dennis Patterson, then the MLA for Iqaluit, acquired this four-bedroom house, building 275, and lived in it with his family for about a year. In 1988, after MLAs chose him to serve as premier of the Northwest Territories, Patterson was required to move to Yellowknife. Since then, he has rented it to various tenants. Right now it’s vacant. (PHOTO BY JIM BELL)

Sen. Dennis Patterson, reacting to a story broadcast nationally on CTV news last week, denies that he resides in Vancouver and not Nunavut.

Following an investigation, CTV reported Feb. 15 that Patterson owns a house in Vancouver and claimed a homeowner grant from the B.C. government.

But Patterson said he resides in Iqaluit and Ottawa, not Vancouver.

He said a CTV crew interviewed the people who live in and near the house in Vancouver that he owns jointly with his wife, and none of those people said he lived there.

“Those interviews did not form part of the story. It left the implication that I was living in Vancouver, which is simply not true,” Patterson said.

In August 2009, when he was appointed to fill the Nunavut Senate seat left vacant by the retirement of the Liberal party’s Willie Adams on June 22 of that year, Patterson, since about 2000, had resided in British Columbia.

“It’s no secret that in 2000, my wife [Patterson’s second wife, the late Geela Kilabuk Giroux] died tragically. It was a pretty devastating event and I did leave Iqaluit at that time because of those circumstances and stayed with my family, particularly my elderly father, who is now 91,” Patterson said.

After his appointment, Patterson promised he would find a residence in Iqaluit and told Nunatsiaq News that he was “most anxious to establish residency here in Iqaluit.”

Since that time, he has rented an apartment, 5104A, in the Plateau neighbourhood.

And 2009, Patterson’s ethnicity was a much bigger source of controversy in Nunavut than his place of residence.

Mary Simon, then president of Inuit Tapiriit Kanatami, asked Prime Minister Stephen Harper to appoint an Inuk to succeed Adams and the late Jose Kusugak, then president of the Kivalliq Inuit Association, called for the appointment of an Inuktitut-speaking senator.

But after Patterson’s appointment, Simon congratulated him and praised his “long and distinguished history of political service to the North.”

After 2000, Patterson’s consulting business took him frequently to Nunavut, where most of his clients, including Nunavut Tunngavik Inc., are located.

“I always maintained connections in Nunavut and they weren’t minimal connections,” he said.

Until recently, he rented apartments in Ottawa for use when he’s in the city doing Senate work.

Patterson said that means he qualified for a Senate housing allowance, worth about $22,000 a year, offered to senators from outside Ottawa who rent accommodation in the city.

But he said he has since decided to buy a condominium in downtown Ottawa, a form of accommodation that qualifies for a lower level of subsidy.

Another property that Patterson owns, house 275 in Iqaluit, lies vacant at the moment, but he said he’s been renting it to various tenants for years.

He acquired house 275 in 1987, when he served as MLA for Iqaluit in the Legislative Assembly of the Northwest Territories.

In 1988, after MLAs elected him premier of the NWT, Patterson was required to move to Yellowknife, the territorial capital, and began renting house 275 to others.

Because his four adult children live on their own, Patterson said he doesn’t need to live in house 275, a four-bedroom house

As for the $205,369.76 in travel expenses that the CTV story said he’s accumulated since September, 2010, Patterson said that’s normal for a northern politician.

“The truth is it’s costly to travel in the North. That’s no secret to any of your readers. The numbers are high because I have been busy and active,” Patterson said.

All this means he’s constantly travelling, throughout the North and throughout Canada.

“I’m a Monday to Friday senator,” Patterson said, referring to the Senate’s normal Tuesday to Thursday schedule, under which many senators spend four days a week in their home regions and three days a week in Ottawa.

“I determined when I was appointed that I would make this a full-time job. I would spend the necessary time in Ottawa, which is where the action is, and for the North, where the money is,” Patterson said.

“I welcome the review. I welcome it and I believe I am in compliance with the rules and the financial reporting requirements of the Senate,” Patterson said.

As for his presence in Iqaluit and Nunavut, Patterson admits that he’s not as “ubiquitous” as he might like.

“Am I there every weekend? No. But it doesn’t mean I’m not working hard for the people of Nunavut,” Patterson said.

This week, Patterson had embarked on a tour of Nunavut that is to take him through Kugluktuk, Arviat, Coral Harbour, Chesterfield Inlet and Rankin Inlet.