ICC at mercury talks in Nairobi 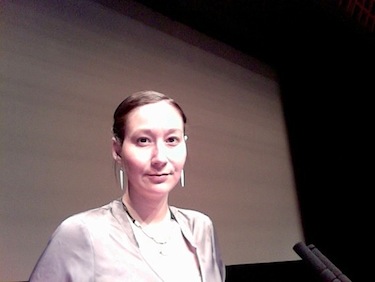 Parnuna Egede, environmental advisor to the Inuit Circumpolar Council-Greenland, was in Nairobi this past week where she represented Inuit at a round of negotiations which by 2013 should result in a global treaty to reduce mercury emissions. (FILE PHOTO)

When negotiators from more than 120 countries worked last week in Nairobi, Kenya, towards a global agreement to reduce mercury emissions, Parnuna Egede, environmental advisor to the Inuit Circumpolar Council-Greenland, was there to represent the Inuit voice in the negotiations.

More than 700 representatives from governments and non-governmental organizations gathered at the headquarters of the United Nations Environment Programme in Nairobi to discuss the future global treaty on mercury, which they hope to reach by 2013.

That binding agreement would aim to reduce emissions of mercury to protect the environment and human health.

“The pollution comes primarily from more southerly latitudes, where it is transported over long distances by winds and ocean currents to the Arctic, and then becomes concentrated in the food chain and ultimately to us. So we follow the UN negotiations closely, because the end result will have a direct effect on our health,” Egede told Greenland’s Sermitsiaq/AG newspaper.

The most recent negotiations, which started on Oct. 31 and wrapped up Nov. 4, were the third of five sessions to address the release of mercury into the environment.

Mercury is listed by the World Health Organization as one of the top 10 chemicals of public health concern because human exposure to mercury can damage the nervous system and cause behavioural disorders.

When released, mercury persists in the environment where it circulates between air, water, sediments and soil. Mercury has toxic effects on humans and wildlife and can enter the food chain through contaminated fish.

Almost all mercury found in Arctic marine mammals, seabirds and freshwater fish comes from industry far to the south, mainly from metal and cement production in east Asia, carried north by winds, ocean currents and rivers.

In the Arctic, mercury undergoes a process in the water, and turns into deadly methyl mercury.

This mercury accumulates in marine life, with serious health implications for people who eat a diet rich in seal and whale, marine mammals which build up high levels of mercury.

Some Inuit women of child-bearing age in Canada and Greenland who consume marine mammals have been found to have mercury levels between three and 10 times higher than people in other areas of the Arctic who rely on store-bought food.

Climate change is expected to pour more mercury into the Arctic environment though thawing permafrost, melting ice and snow and increased flows in rivers.

A “legally-binding global agreement” is needed to control mercury emissions in the Arctic, said an assessment on mercury, Arctic Pollution 2011, released by the Arctic Monitoring and Assessment Program last May.

Ludovic Bernaudat of the UN Industrial Development Organization told journalists meeting in Nairobi that the high price of gold (currently over $1,700 per ounce) is sparking a “gold rush” in many countries, increasing the urgency of reducing the use of mercury in the mining sector.

As mercury is present as a contaminant in fossil fuels, reducing emissions of mercury from coal-fired power stations and the burning of oil and gas is also a priority, he said.

“We can follow the progress of work and how any disagreements arise between countries. And where we can get to it, we remind them of their global responsibility for the effects of their pollution on the health of indigenous peoples and other vulnerable populations, and trying, in this way, to influence the negotiations towards a stronger and more ambitious convention,” Egede, who holds a master’s degree in biology, told Sermitsiaq/AG.

Negotiators will meet again next June to continue their talks.