Canada objects to principle of free, prior and informed consent 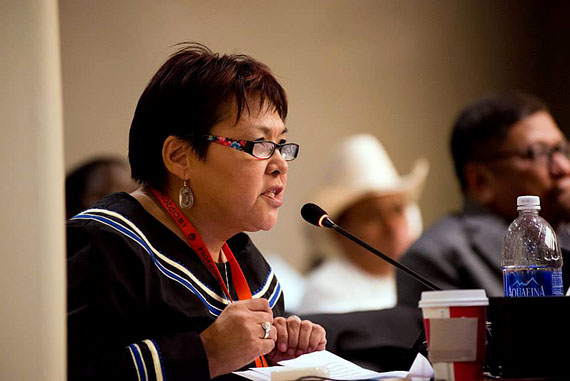 Okalik Eegeesiak, the international chair of the Inuit Circumpolar Council, at the World Conference on Indigenous Peoples held Sept. 23 and Sept. 24 at the United Nations headquarters in New York City. (UN PHOTO)

Aboriginal leaders, including Okalik Eegeesiak, the Inuit Circumpolar Council’s new international chair, say they’re disappointed in the position that Canada took this week at the World Conference on Indigenous Peoples, with some accusing Canada of acting to undermine indigenous rights.

More than 1,000 indigenous leaders representing an estimated 320 million people sat down with governments Sept. 22 to Sept. 23 in New York City to discuss the implementation of the United Nations Declaration on the Rights of Indigenous Peoples.

In the conference’s final statement, or “outcome document,” governments agreed to continue implementing the declaration.

But Canada objected to paragraphs in the document that assert the principle that indigenous peoples must give free, prior and informed consent to activities on their lands.

“Free, prior and informed consent… could be interpreted as providing a veto to Aboriginal groups and in that regard, cannot be reconciled with Canadian law, as it exists,” said Canada’s Sept. 22 statement.

The Canadian government kept a low profile at the conference and was not represented by either the prime minister or a cabinet minister.

Instead, they sent a senior bureaucrat, Colleen Swords, who has served as deputy minister of Aboriginal Affairs and Northern Development since July 2014.

Eegeesiak said Sept. 24 that Canadian Inuit groups, acting through the ICC, have worked for years to prepare recommendations for the outcome document.

“So we were a bit disappointed that [the federal government] wasn’t at the floor,” she said.

“And we were disappointed that they submitted reservations around the document, namely the part around free, prior and informed consent.”

In a Sept. 25 email to Nunatsiaq News, Aboriginal Affairs minister Bernard Valcourt’s office said the government has in place a “constitutionally-entrenched framework that ensures the consultation and accommodations as appropriate, of Aboriginal interests.”

“This framework also balances the interests of non-Aboriginal Canadians and it has served as a model for nations around the world,” the email read.

“Since 2006 our government has passed unprecedented reforms that give Aboriginal peoples access to the same basic rights that other Canadians have long enjoyed.”

But Dalee Sambo Dorough, an Iñupiaq academic from Alaska who teaches at the University of Fairbanks and serves as chair of the UN Permanent Forum on Indigenous Issues, unloaded on Canada in an interview with Deutsche Welle, Germany’s international broadcasting network

“Their narrow interpretation of rights such as prior and informed consent or the right to self-determination or the right of indigenous people to participate in matters that directly affect them… that’s highly disturbing and absolutely regressive,” she said.

And Sambo Dorough, who provides human rights advice to the ICC, said Canada’s position sends a poor message to Aboriginal people in Canada.

“Those indigenous people who find themselves living in Canada today are extremely disappointed and embarrassed by what their government had to say on the floor today,” she said.

The Assembly of First Nations echoed those remarks in a Sept. 23 statement that calls on Canada “to stop trying to obstruct and deny indigenous rights.”

The AFN’s national chief, Ghislain Picard, said Canada “continues to embarrass itself and isolate itself on the world stage by offering to explain their vote yesterday and outlining a series of objections.”

The WCIP outcome document lists a number of commitments, including “to consult and cooperate in good faith with the indigenous peoples concerned through their own representative institutions in order to obtain their free and informed consent prior to the arrival of any project affecting their lands or territories and other resources.”

The document also commits governments to work to improve the social and economic conditions of their indigenous populations and respect traditional indigenous knowledge.

Despite Canada’s reservations, the document was passed Sept. 23, with Canada included as a member state, Eegeesiak noted.

“The question of actually implementing the agreement with indigenous peoples is another story,” she said.

“We have to work with the government to implement it. [The document] just helps us grow our relationship.”