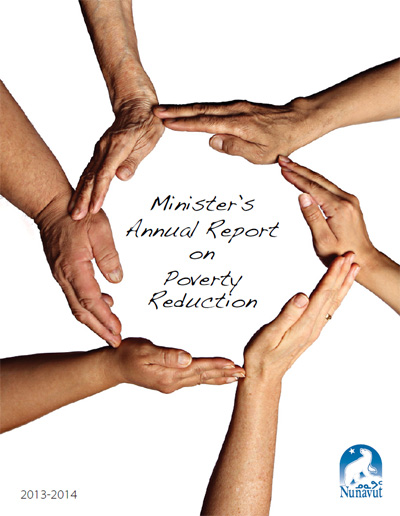 The GN’s first report on poverty reduction outlines 65 programs and policies developed by different government departments, with a total budget of $254 million. But the report acknowledges the difficulty in measuring the effectiveness of those programs.

Nunavut’s department of Family Services says it’s working on a list of indicators to measure the effectiveness of programs aimed at reducing poverty across Nunavut.

The poverty reduction division of Government of Nunavut’s family services department appeared before MLAs in the legislative assembly May 31 and June 1 during a review of the department’s 2013-14 annual report on poverty reduction.

The department’s first report on poverty reduction outlines 65 programs and policies developed by different government departments, with a total budget of $254 million.

Many of these initiatives flow from the GN’s Makimaniq Plan, released in 2012, and poverty reduction legislation drafted to monitor long-term progress on the plan.

But, as the report itself acknowledges, it’s been hard to determine their impact on the territory.

“While each department continues to evaluate its own individual programs, it’s currently a challenge to report on the collective impact of the various government activities listed in this report,” read a section of the 2013-2014 report.

“These indicators that we’re looking at are going to measure the different things in the Makimaniq Plan, [to] measure our strength and support for healing and well-being; indicators that will measure whether or not the income assistance program is more supportive,” Lindsay Turner, director of the GN’s poverty reduction division, told the legislature June 1.

“We are working to finalize this list of indicators and it will be included in the next minister’s annual report on poverty reduction.”

Those indicators should help paint a much clearer picture of if and how the territory’s broad array of programs are helping alleviate poverty in Nunavut, where four in 10 residents rely on social assistance as a primary source of income.

A 2013 report prepared by Nunavut’s Anti-Poverty Secretariat proposed the territory’s income security system be rebuilt and focused on a system called Basic Income, a type of guaranteed living wage, along with better child benefits and a refundable cost of living allowance.

But while both the GN and Nunavut Tunngavik Inc. committed in 2013 to rejigging the system in favour of “progressive change,” the latest government report shows there hasn’t been much movement towards a basic income model.

“Basic income is not something that has been considered at this time up until now for the Income Assistance Program,” Turner told the legislature June 1.

“The department of Family Services has been working over the last year on a review and the reform of the Income Assistance Program that will then propose important changes to the program that will help to support Nunavummiut and the social assistance clients.”

And some MLAs had questions for the department about why the report took so long to be reviewed.

And Kuksuk said the department’s 2014-15 report on poverty reduction won’t likely be tabled until 2017.

“There is more we can do,” Kuksuk told the legislature June 1. “We continue to face many social challenges.”