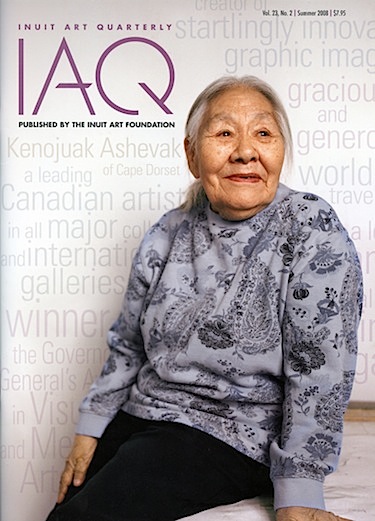 After 25 years of work in support of Inuit art and artists, the Inuit Art Foundation will close its doors March 31 after selling off stock left inside its Inuit Artists’ Shop at Merivale Rd. in Nepean, an Ottawa suburb.

IAF’s long-time executive director Marybelle Mitchell could not be reached for comment about the closing, which will see shop stock sold at discounts of up to 50 per cent.

But media reports have suggested that money problems prompted the decision to close the foundation, whose board of directors which, according to information on the IAF website, includes well-known artists like Mattiusi Iyaituk of Ivujivik and Mathew Nuqingaq of Iqaluit.

Michelle Perron, spokesperson for Aboriginal Affairs and Northern Development Canada, said on Jan. 31, the IAF’s board passed a resolution to wind up business operations of the Foundation including the closure of the Inuit Artist’s Shop in Ottawa.

“The department was not consulted or informed of this decision prior to announcement of the closure of the Ottawa Inuit Art Shop,” Perron said.

The department was “verbally informed” of the decision to dismantle the IAF only on March 1.

Officials plan meet with representatives of the IAF to discuss the decision, Perron said.

The IAF’s $458,000 yearly grant from Aboriginal Affairs and Northern Development for core operating and administrative expenses, which provided about 40 to 45 per cent of the foundation’s annual revenues, was up for renewal on March 31.

And, as part of Ottawa’s cost-cutting review of programs, an evaluation by the federal government looked at the IAF’s relevance, operations and performance between 2005 and 2010.

That evaluation gave the foundation a mixed review.

And the evaluation recommended Aboriginal Affairs and Northern Development take a second look at IAF’s role and funding.

It also developed an action plan for IAF management that included increased outside fundraising, communications and other partnerships.

The evaluation highlighted serious problems at the IAF.

These included references to feedback that showed many Inuit artists didn’t know what the IAF does and couldn’t read its publication, the glossy Inuit Art Quarterly.

The evaluation also found the IAF wasn’t keeping adequate records that could have revealed whether the organization was producing results.

The evaluation uncovered little tracking data at the IAF, such as feedback about the Inuit Artists’ Shop and its specific sales, or about its Cultural Industries Certificate Program.

The evaluation said that the “absence of reliable and quantifiable data hinders the IAF in being able to make effective and efficient decisions or attract and engage potential partners and supporters.”

The IAF “lacks the capacity to maintain active partnerships outside of specific projects,” it concluded.

After its 62 interviews and a thorough look at the IAF’s operations, the evaluation also found:

• “no indication of concerted progression towards long-term goals;”

• “stakeholders are divided on the degree to which the IAF is successfully effecting social and economic development;”

• “little exists in the way of long-term partnerships;”

• “stakeholders are also skeptical that the IAF has had any significant effect in regards to its intermediate or long-term objectives,” and,

• some artists who were “unaware of the Foundation’s work, or felt it was limited to specific regions,” such as Nunavut and Nunavik.

The evaluation concluded “there is still significant work to be done in order to realize the role of a national Inuit artists’ organization.”

• Communications, through the only magazine in Canada dedicated to Inuit art, the Inuit Art Quarterly, with a circulation of about 3,000;

• Fundraising events such the Qaggiq art projects and collaborations with outside agencies and private sector sponsors;