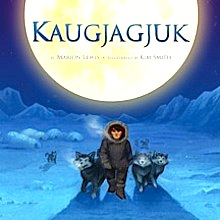 Author Marion Lewis is in Repulse Bay where she’ll meet with local kids about her book, Kaugjagjuk, this week as part of Inhabit Media’s support for Nunavut Literacy Week.

Inhabit Media is celebrating Nunavut Literacy Week, Sept. 23 to Sept. 30, with new publications for Nunavut classrooms and school visits by one of the publishing house’s authors.

Author Marion Lewis visited Tusarvik School in Repulse Bay this week to speak to its 382 students about her book Kaugjagjuk (for Grade 3 to Grade 5) and the importance of literacy.

“Our recent publications will help build rudimentary Inuktitut language skills, introduce students to celebrated creatures from Inuit mythology, and celebrate traditional life in a way that is interesting and fun for today’s kids,” said the news release.

Those new books include:

• Ukiuqtaqtuup Uumajungit is the first board book ever published in Inuktitut: “this durable book, intended to the very earliest readers, teaches preschoolers the Inuktitut names for various wildlife species found across Nunavut. Photographs of each animal accompany the Inuktitut names, to give children all the tools they need to identify animals in Inuktitut out on the land.”

• Ava and the Little Folk by Neil Christopher and Alan Neal introduces students in Grades 2 to 5 to the world of the Inugarulligaarjuit: “this whimsical children’s story brings these mythological characters to life, while also introducing children to new Inuktitut terminology.” It’s available in English and Inuktitut.

• The Giant Bear by Jose Angutinngurniq brings “an age-old hunting story from the Natsilik region” to students across Nunavut: “this exciting tale of a hunter’s ingenuity will bolster students’ love for traditional mythology and hunting methods.” As a result of co-operation between the QIA, the Society for Building a Healthier Kugluktuk, and the Nunavut Bilingual Education Society, this story is available in English, Inuktitut, and Inuinnaqtun.

As part of their continued efforts to promote Nunavut-produced books in Nunavut schools, Inhabit Media and the QIA have also launched a territory-wide writing contest for students.

Designed to get kids reading northern books during Nunavut Literacy Week and beyond, the contest asks students to submit a one-page book report on their favourite northern book.

The most creative and exciting entries will win a prize pack consisting of Inhabit Media publications, a t-shirt, and other literacy-related prizes.

Contest entries will be accepted until Nov. 1, and can be sent via email or regular mail to: