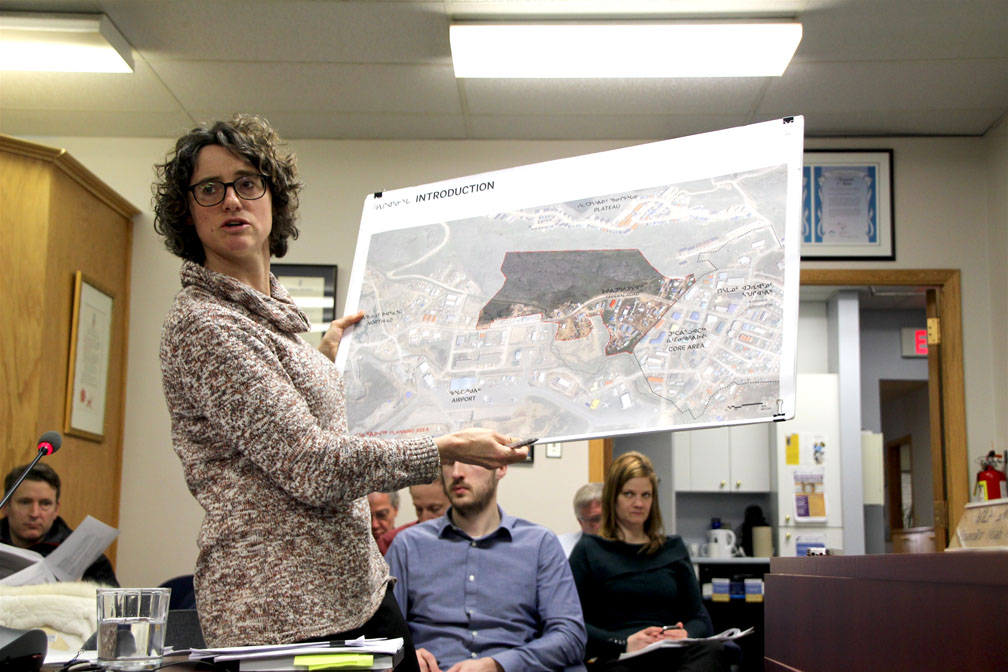 Michelle Armstrong, planning and development officer for the City of Iqaluit, displays a map showing a parcel of Inuit-owned land that the Qikiqtaaluk Corp. is seeking development permits for, during a committee meeting held earlier in April. Last week, city council approved a development permit that would let the company start building a hotel and conference centre on Federal Road in two phases. (PHOTO BY BETH BROWN)

The Qikiqtaaluk Corp. doesn’t yet have full permission from the City of Iqaluit to build a new hotel and conference centre on Federal Road, but the Inuit-owned birthright corporation did get a go-ahead for preliminary site preparation work this summer on their proposed new building.

Iqaluit city council passed a motion last week to issue a development permit to QC for the hotel and conference centre in two steps, or phases.

The 94-room hotel and 600-person conference centre is part of a larger plan by the Qikiqtani Inuit Association to also build a heritage centre, performing arts centre, and affordable Inuit housing on a 40-acre parcel of Inuit-owned land.

A 143-seat bar would be attached to the hotel.

The QIA is the designated Inuit organization that manages the land, which Inuit own in fee simple title through the Nunavut Agreement.

“The phased approach to approvals will allow the applicant to start site preparation and piling works, while the details of the required off-site servicing agreement can be determined,” the city’s acting chief administrative officer, Amy Elgersma said in a city council memo, April 24.

That servicing agreement has to do with a roadway and sewer line that QC will finance on the undeveloped land.

The city wants to make sure it won’t be indebted to QC for that infrastructure.

So the two parties are working out a cost recovery agreement for the road and sewer line.

That could come into play if the city receives revenue from a future subdivision that could be attached to the new access road and sewer system.

Once that’s all worked out, a final permit would be issued for QC to build the hotel, road and sewer line.

Coun. Kyle Sheppard suggested the two-step development permit during a meeting of Iqaluit’s planning and development committee on April 11.

“We’re not putting ourselves at risk by allowing limited development,” Sheppard said.

But Deputy Mayor Romeyn Stevenson said he wondered if it is wise to allow preliminary development before a full permit is issued.

“He wants to order a building … a building that isn’t approved,” Stevenson said.

“We will take the risk, we are ready to order,” he said.

“We entered into a discussion with the city in good faith … We’d like to get underway with the hotel, and certainly create language that protects the city,” Nimchuk said.

The project could end up delaying the city’s plans to pave Federal Road, Mayor Madeleine Redfern said, because it makes more sense to pave the road after any new sewer lines are put in.

Hotel space is in short supply in Iqaluit, and has been since the Hotel Arctic shut down last summer.

That building is now a residence for Nunavut Arctic College students.

Another hotel is being built by the Nova Group of Companies in Iqaluit this summer in a lot across from the Tammaativvik boarding home.