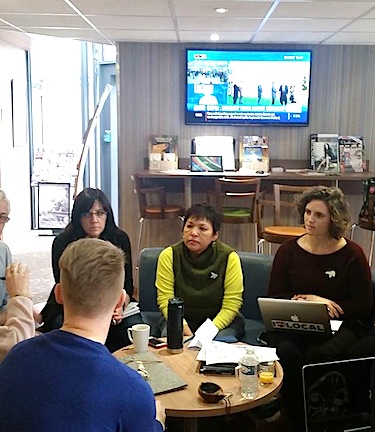 Okalik Eegeesiak, the chair of the Inuit Circumpolar Council, in the centre, talks Nov. 30 in Paris with other members of the joint Inuit-Saami delegation to COP21. (PHOTO COURTESY OF THE SAAMI COUNCIL)

The Inuit Circumpolar Council is calling on world leaders meeting in Paris this week to work towards a climate change agreement that will limit global temperatures to an increase of no more 1.5 C by 2100 and to find ways to cut the sources of Arctic warming.

But, no matter what global climate change pact is produced Dec. 11 at the end of the COP21 talks, the ICC also wants to make sure Inuit living in developed nations such as Canada gain access to international money to help them adapt to warmer Arctic temperatures.

That’s the gist of the ICC position paper, called “Inuit Call for Action from Global Leaders,” aimed at delegates attending the United Nations Framework on Climate Change meetings — called COP 21, because it’s the 21st time there’s been such “a conference of the parties.”

At the end of the day, money issues remain important at COP 21: many nations are expected to make big commitments to spend money on climate change adaptation in whatever agreement — binding or non-binding — emerges from the gathering of 40,000 delegates and diplomats from 195 nations.

The ICC wants money so “Arctic, Indigenous, and remote communities” have access to renewable energy options that will “increase our economic viability and decrease dependence on energy imports and outside resources.”

That was an issue at COP 21, where Norway paid the expenses of Inuit and Saami attending the conference as observers.

Okalik Eegeesiak, the ICC chair and leader of the Arctic delegation with Saami, was to meet Dec. 2 with François Hollande, the president of France, the host country to COP 21, to deliver the position paper which she signed in syllabics.

“The ICC, as the international voice of Inuit, we respectfully call upon global leaders at the UN Climate Change Conference of the Parties (COP 21) in Paris, France to listen to, commit to support and act upon the climate issues and requests identified by the Inuit of the Arctic and other Indigenous peoples,” the position paper reads.

The ICC’s position paper urges global leaders “to support Inuit in sustaining our livelihoods” by recognizing the role of the Arctic in regulating the world’s climate and taking “concrete action” to keep any increase in global temperatures below 1.5 C, and reduce the impact and amount of climate-warming soot, methane and emissions that enter the Arctic.

• the integration of Inuit and Indigenous knowledge and local monitoring of regional and global environmental assessment processes and reports;

• participation of Inuit in climate change-related processes and programs at local, national, regional and international levels within such forums as the Adaptation Fund Board, which is expected, among other organizations, to hand out money;

In its position paper, the ICC also calls on the international community to respect Inuit sovereignty, to acknowledge the important role of the Arctic Council “as a model for cooperation and collaboration” and to develop other decision-making forums that include Indigenous peoples as full participants.