“We must now, collectively, work together to find solutions,” ITK’s Natan Obed says 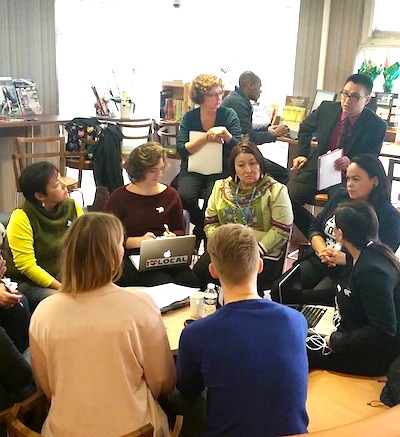 The Arctic caucus members from the Inuit Circumpolar Council and the Saami Council meet in Paris Nov. 30, while watching the arrival of attendees arriving to COP21. The ICC, with Saami from Norway, Sweden, Finland and Russia, is leading the Arctic indigenous delegation. (PHOTO COURTESY OF THE SAAMI COUNCIL) 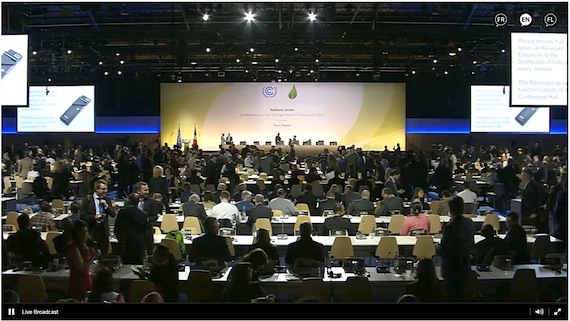 You can watch what’s happening in Paris where the COP21 climate change talks are taking place on live webcasts. (PHOTO COURTESY OF UNEP)

After attending the 10th anniversary of the signing of the Nunatsiavut land claims agreement in Nain, Obed heads to Paris Dec. 2.

There, Obed will take part in Canada’s official delegation to the United Nations climate change talks, which will “decide the very future of the planet,” French President François Hollande said Nov. 30 in his opening remarks.

During COP21, the 21st annual meeting of the nation states that make up the UN Framework on Climate Change, more than 40,000 diplomats and delegates from 195 nations will try to craft a global agreement to limit the average global temperature rise to two degrees Celsius by the year 2100.

“We must now, collectively, work together to find solutions to not only mitigate the further progression and impacts of climate change, but to provide support to those who are already facing direct and significant impacts,” Obed said in a Nov. 30 ITK release.

“Paris is a key climate summit, and I will be focused on contributing to Canada’s presence by working on creating positive outcomes for the Arctic, which in turn will benefit all nations.”

The vice president of Inuit Circumpolar Council-Canada, Herb Nakimayak, is also a member of the official Canadian delegation, along with Nunavut Premier Peter Taptuna and Nunavut MP Hunter Tootoo, the federal fisheries minister.

But the Arctic delegation will lobby leaders and delegates to support a commitment to limit the average global temperature rise to 2 C by the year 2100 through a binding agreement to cut climate-warming greenhouse gas emissions.

In the Arctic, a two-degree rise in average global temperatures would still see Arctic temperatures increase by at least 3 C to 6 C higher by 2100.

So Inuit want to see “enhanced measures to stabilize greenhouse gas” so that the global temperature rise remains at 1.5 C.

Inuit also want to see support for Inuit adaptation and mitigation efforts, the use of Inuit knowledge in evidence-based decision making, and the creation of a global financing mechanism to support indigenous peoples, including Inuit, to monitor and combat climate change.

The Arctic delegation will participate in a Dec. 8 Arctic Day event and in the “Arctic Encounter Paris” conference, a three-day event whose speakers include Nunavut’s premier, environment minister and NIYC President Okalik.

Arctic Encounter Paris 2015 is the only Arctic-related policy and economics side event to take place during the COP21, the event’s website says.

More than 500 participants are expected at Arctic Encounter Paris, which will be the third largest COP21 side-event and third largest Arctic policy gathering of 2015.

If you’re curious to see what’s going on in Paris — and have the bandwidth to do that, you can listen in to webcasts from the Le Bourget conference centre here.