“We’re asking that Inuit actually lead it and actually manage it, as opposed to co-managing by governments and Inuit organizations” 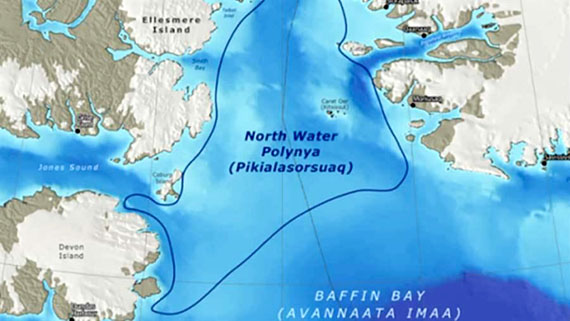 This map shows the North Water Polynya, or Pikialasorsuaq, which lies between Baffin Island and Greenland. (FILE IMAGE)

A commission under the banner of the Inuit Circumpolar Council says control over the North Water Polynya, an area of ice-free water, which lies between Greenland and Nunavut, should be managed by a new Inuit-controlled authority.

The commission also says that Inuit from Greenland and Nunavut should be allowed passport-free travel between the two jurisdictions.

These recommendations are contained in a report released on Thursday, Nov. 23, by the ICC’s Pikialasorsuaq Commission. The report, “People of the Ice Bridge: The Future of Pikialasorsuaq,” follows lengthy consultations with stakeholders.

“Greenland and Canada share an Arctic treasure,” said Kuupik V. Kleist, the former premier of Greenland and one of three commissioners assigned to the project, who was quoted in the report’s accompanying news release.

Known by Inuit as “Pikialasorsuaq,” or “Great Upwelling,” the North Water is a biologically rich ecosystem stretching across the waters of Baffin Bay and Davis Strait. It’s home to numerous species—including narwhal, beluga, bowhead whales, walrus and polar bears—that have traditionally been a vital source of food for nearby Greenlandic and Nunavut communities.

“The Pikialasorsuaq is seriously threatened by rapid change in the region including climatic and environmental change, increased shipping activities, tourism, oil and gas exploration and development,” the report states.

“Inuit who live [by] and use the Pikialasorsuaq must be recognized and respected as leaders in ensuring the protection of this area.”

Following the release of the report, World Wildlife Fund-Canada said in a statement that it supports the recommendations outlined by the commission.

“World Wildlife Fund Canada encourages the governments of Canada, and Denmark and Greenland, to fully implement the recommendations outlined in this report as a key step toward protecting this critical habitat and toward reconciliation with Canada’s Inuit,” said WWF-Canada President David Miller.

• The creation of a management “regime” led by Inuit representatives from communities in the North Water zone.

• The establishment of a protected area around the North Water, along with a larger “management zone” monitored and managed by Inuit and recognized internationally.

• A “free travel zone” for Inuit across the Pikialasorsuaq region.

The free travel zone would help resolve growing customs issues for Inuit hunting in the area and reconnect families on either side of Baffin Bay, the report said, as restrictive laws in place since 2001 have severely limited access.

“Furthermore, due to other drivers of change such as climate change, travel across the Pikialasorsuaq is increasingly dangerous and not always possible,” the report added, as seasonal ice bridges that form across the Nares Strait only become stable later in the year, if at all.

The commission’s proposed management authority for the area would be similar to agreements reached between the Australian government and its Indigenous peoples to create “Indigenous Protected Areas” with legal protections akin to those of a national park.

“Such a designation in the Pikialasorsuaq has the potential to usher in a broader, more meaningful set of northern benefits and bring definition to the idea of a conservation economy for Inuit,” the report said.

But the commission’s recommendation could come with some steep challenges.

Any agreement on the management authority and free travel zone would need approval from the Canadian, Greenlandic, Danish and Nunavut governments, as well affected municipalities in all jurisdictions.

Inuit organizations such as Nunavut Tunngavik Inc., the Qikiqtani Inuit Association, along with ICC Canada and ICC Greenland, would also have to agree on the terms of reference for the proposed authority.

The proposed regime would also be adjacent to, or encompass, other protected zones inside the North Water Polynya like the newly unveiled Lancaster Sound National Marine Protected Area announced by the Government of Canada this summer.

The difference, the ICC international chair, Okalik Eegeesiak, told Nunatsiaq News, is that the proposed management zone would be “Inuit led, Inuit managed and Inuit monitored” and not beholden to the federal government.

“We’re asking that Inuit actually lead it and actually manage it, as opposed to co-managing by governments and Inuit organizations,” she said.

Another coalition of international agencies is proposing that several areas within the waters of the Arctic Circle be designated UNESCO World Heritage Sites. Two of those areas are in Canada’s eastern Arctic Ocean.

The polynya’s ecosystem may also be at risk from rockets launched by the Russian Space Program, due to contamination from highly toxic fuel left over in rocket stages occasionally dropped over Baffin Bay.

Eegeesiak said the commission is currently requesting a new mandate to work with local communities in implementing its recommendations.

“We will have to work with governments of course, educate them about how we could solve it with the communities and what the communities would like to see in terms of managing the area, but that’s still to be determined,” she said.