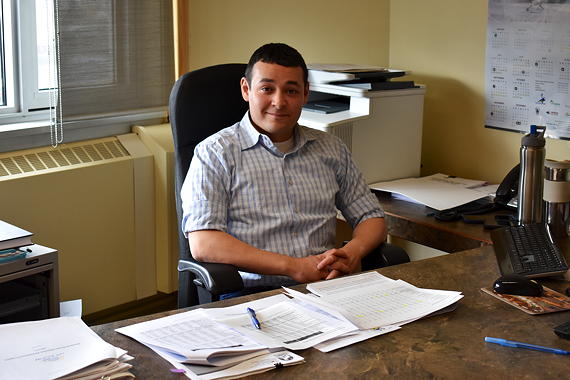 Barely one-quarter of the Government of Nunavut’s staff housing is occupied by Inuit.

That needs to change, says Adam Lightstone, MLA for Iqaluit-Manirajak. He wants to see the GN’s staff housing policy amended so that more Inuit benefit.

“Since Nunavut’s creation we have been facing a tragic housing shortage, and it is widely known but along with the housing shortage comes overcrowding and all the other social implications that go along with it,” Lightstone said.

“If the numbers were the opposite, and there were 1,043 Inuit in staff housing, that would house thousands of more Inuit—as the average Inuit household has at least four people in it—and greatly reduce the housing shortage in Nunavut.”

Lightstone received the numbers from Nunavut’s Department of Finance on July 30, after submitting written questions on the subject to Finance Minister David Akeeagok in the legislative assembly on June 14.

The numbers show that only 377 out of 1,420, or 26.55 per cent, of government staff employees who receive staff housing are Inuit from Nunavut.

Lightstone said he had a hunch the numbers would be low. He just didn’t expect they would be that low.

Along with the total number of Inuit and non-Inuit who receive government staff housing as of June 1 of this year, the documents Lightstone received from Akeeagok included a breakdown by department and employment category.

Lightstone organized the data he received from Akeeagok into several spreadsheets and shared both the original answers and his re-ordered data with Nunatsiaq News on August 8.

According to Lightstone’s spreadsheets, the education department has the lowest amount of Nunavut Inuit receiving staff housing, with a total of 74 Inuit and 420 non-Inuit. That is just 15 per cent.

The Nunavut Housing Corp. and Department of Health follow close behind, with 17.6 and 19.7 per cent, respectively. While the NHC has 51 employees in total who are receiving staff housing, only nine of those are Inuit.

The Department of Community and Government Services has 23.5 per cent of Nunavut Inuit receiving staff housing ―24 of housed staff are Inuit and 78 who are not.

“Some of the departments are doing exceptionally well,” Lightstone said, in an interview in his office on Wednesday morning. “But those departments have relatively low staff housing in general.”

Other departments and agencies with high percentages of Inuit in staff housing include the Office of the Languages Commissioner at 71.4 per cent, Executive and Intergovernmental Affairs at 70 per cent and the Nunavut Business Credit Corp. at 66.7 per cent.

But those organizations have small numbers of employees receiving staff housing—if you add the three departments together, the numbers amount to just 40 people.

Children are more likely to develop health issues, like tuberculosis. And it’s much more difficult to keep up with homework when you live in an overcrowded household, he said.

Lightstone said the territory’s staff housing policy has been used mainly as a way to encourage people to move to Nunavut, rather than to encourage Inuit already living here to join the GN workforce.

Lightstone said he was surprised to learn how many employees ―Inuit and non-Inuit―receive staff housing when they are in positions of middle and senior management or executive roles, where it is clear that their salary is more than $150,000 a year.

There are 187 people in “middle management,” 69 in “senior management” and 12 in “executive” roles who benefit from the GN staff housing policy. There are another 740 people in “professional” careers, likely making over $100,000 who are also benefiting from this subsidy.

While there are 148 Inuit in these higher-earning professional, management or executive roles who receive staff housing through the GN, 855 non-Inuit in those categories benefit from staff housing.

Lightstone said he is not against staff housing in general―he understands the need to offer an incentive to bring newcomers in certain professions to work in Iqaluit. But he said there should be changes made to prioritize Inuit, and there should be a cut-off point in salary when an employee is making enough money to no longer require staff housing after a certain time.

According to Lightstone, there are GN employees who spend their entire public service career in staff housing.

“It needs to be adjusted to be a short-term subsidy,” Lightstone said, suggesting just the first few years of employment might be a good idea.

“The way things are going now, I doubt we would ever see an increase in Inuit allocations in staff housing unless the government makes that part of the policy or a priority.”