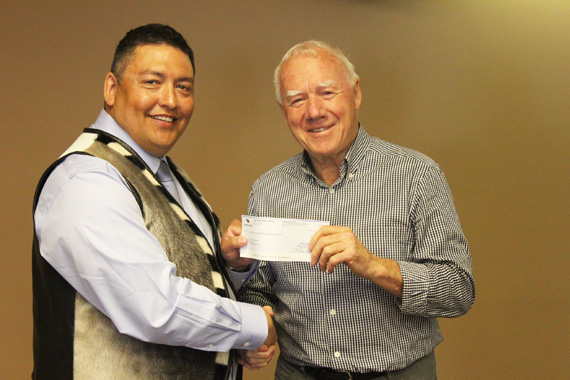 KIA president David Ningeongan, left, receives a $1.5 million cheque from Agnico Eagle Mines Ltd. chair Jim Nasso this past July 13. That payment is the first under the Inuit org’s IIBA for the Meliadine gold project, which provides them with improved contracting and financial compensation measures. (PHOTO COURTESY OF AEM)

The Kivalliq Inuit Association says the Inuit Impact Benefit Agreement for the region’s Meliadine gold project is a step up from past agreements in what it offers Inuit.

After more than three years of negotiations, the KIA and Agnico Eagle Mines Ltd. completed and signed an IIBA last July for the company’s Meliadine gold project.

“The KIA is also taking an active role in its implementation of the IIBA through the committees created by the IIBA, all of which improve on the provisions found in the Meadowbank IIBA.”

If Agnico Eagle decides to go ahead with it, Meliadine, located about 26 kilometres north of Rankin Inlet, would become its second gold mine in the Kivalliq region.

The IIBA, a copy of which has been obtained by Nunatsiaq News, is still be translated into Inuktitut, but a 138-page English version highlights the mining company’s various commitments on Inuit employment, goods and service contracts, and resource royalties.

In negotiations, talks between the Inuit association and the mining company sometimes hit a roadblock around issues like financial compensation and preference points for Inuit contractors.

At one point in 2014, when talks reached an apparent impasse, Agnico Eagle asked the federal government to provide compulsory binding arbitration.

However, the completed IIBA awards points to Inuit firms recognized under Nunavut Tunngavik Inc. based on how much of the contract they’ll fulfill, their percentage of Inuit employees and their local presence, with the highest scores going to affected Kivalliq communities.

The IIBA says Agnico Eagle must make its “best efforts” to award contracts to Inuit firms, providing at least 11 months notice prior to the expected construction or operation date.

An employment and culture committee will set annual goals on the required number of Inuit to be employed in selected trades and job categories.

The IIBA also commits Agnico Eagle to work towards a minimum rate of 50 per cent Inuit employment.

Along with that commitment, the mining company must develop work readiness and training programs, as well as promote women employees into non-traditional roles.

To help reach those goals at Meliadine and the company’s other Nunavut mine, Meadowbank, Agnico Eagle will pay out at least $750,000 each year on initiatives designed to help it meet 50 per cent Inuit employment.

Agnico Eagle will pay the KIA what’s called Net Smelter Returns, or a royalty of 1.2 per cent of the net revenue it receives through the sale of the mine’s metals.

The KIA even has the option of receiving those payments as refined gold.

With the signing of the IIBA last July, Agnico Eagle said it made its first payment of $1.5 million to the KIA.

Throughout the life of the mine, Agnico Eagle has responsibilities towards wildlife around the mine site.

The company must pay compensation for animals that are relocated or killed due to mining activity, from $2,500 per caribou to $500,000 for a bowhead whale.

Some other provisions of the agreement:

• Agnico Eagle must hold information sessions in the surrounding Kivalliq communities at least once each year to keep residents up to date on the project;

• Agnico Eagle will seek out and apply Inuit Qaujimajatuqangit in all decision-making affecting its Meliadine project in assessing and monitoring impacts and mitigation measures;

• Agnico Eagle will allow Inuit access to the lands and waters on the Meliadine property to engage in traditional activities, although Inuit are not permitted to discharge firearms within a radius of one mile of a building, structure or facility;

• The agreement doesn’t prevent Agnico Eagle from ceasing operations at Meliadine but obligates the company to notify the KIA and work towards a post-operation phase at least 18 months before the scheduled shut down.

We tried to reach representatives from the KIA to ask what they are doing with the money which the association haa already received from Agnico Eagle, and the royalties they stand to earn as well. The KIA did not respond to our requests.

The Nunavut Impact Review Board issued Meliadine its project certificate earlier this year, subject to 127 terms and conditions.

Agnico Eagle has said the mine could produce 400,000 ounces of gold per year over a 13-year lifespan and the company hopes to run the mine from about 2018 to 2030, and possibly longer.

But in fact, the company has yet to make a final decision to build a mine there. Agnico Eagle said it plans to take the project to its board of directors some time this year.

You can read the rest of the agreement here.