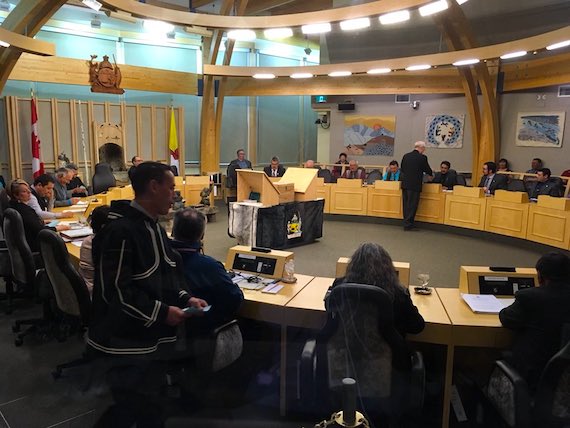 Voting by MLAs in the Nunavut legislature on June 14 produces a winner and new premier for the territory after two ballots. As soon as Joe Savikataaq’s win was announced, the congratulatory messages started to flow. (PHOTO BY BETH BROWN)

Within minutes of the announcement that Joe Savikataaq would be Nunavut’s new premier, reaction to the political changes in Nunavut started to appear via news releases and on social media.

Nunavut Tunngavik’s President Aluki Kotierk was the first to congratulate Savikataaq on his appointment as premier, which came at about 7:30 p.m. on Thursday.

“NTI respects the decision made by the Members of Legislative Assembly. I look forward to working with Premier-designate Savikataaq to implement the Nunavut Agreement and advancement of Inuit interests,” Kotierk said in a release.

Savikataaq became premier, Nunavut’s fifth, after Paul Quassa, the MLA for Aggu, was removed as a member of the executive council by a non-confidence motion that passed Thursday morning.

“We thank Mr. Quassa for his service and will continue to work with him as a regular member of the Nunavut Legislature,” Kotkierk said June 14.

With the news that he would become Nunavut’s new premier, Savikataaq also became a “Twitter Moment Canada:”

It was a busy day in the Nunavut Legislative Assembly. Just hours after Paul Quassa was removed as premier, Joe Savikataaq was elected by MLAs to fill the position. https://t.co/fLkNubtrFA

Many Nunavut residents also went to the Nunatsiaq News Facebook page to congratulate their new premier: “Congratulations Joe, you’re going in the right direction and have backing of many Nunavummiut” and “I hope you will continue in keeping I.Q. as a basis for all decisions.”

Early June 15, the Qikiqtani Inuit Association added its congratulations to Savikataaq on his appointment.

“We have a strong working relationship with the Government of Nunavut on important initiatives and programs that impact Qikiqtani Inuit,” the QIA’s president P.J. Akeeagok said in a news release. “I look forward to collaborating with Premier Savikataaq.”

The QIA also thanked Quassa for his many years of service to Nunavummiut.

“We hope to build on our relationship with him as he continues his service as the Igloolik MLA,” Akeeagok said.

And the Kitikmeot Inuit Association sent a message of support as well.

“Congratulations to Premier Savikataaq and we look forward to working with the Government of Nunavut in moving forward our social, cultural and economic development opportunities within the region,” KIA President Stanley Anablak said. “Partnerships can help to ensure the long-term viability of projects and we look forward to our continued partnerships with the various departments within the Government as we strive to bring benefits to our beneficiaries.”.

“Nunavut has one of the fastest growing and youngest populations in Canada. Respect, inclusion, and the full participation of the people of Nunavut is essential to the territory’s—and Canada’s—ongoing progress and prosperity,” Trudeau said.

“I look forward to working with Premier Savikataaq to improve the well-being of Indigenous Peoples, build more sustainable and diversified economies in the region, and ensure all residents of the territory can benefit from healthy, vibrant communities.”