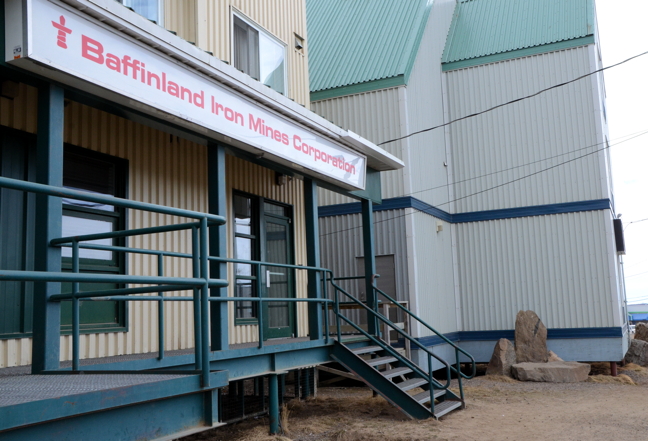 Baffinland Iron Mines Iqaluit office: both Nunavut Tunngavik Inc. and the Qikiqtani Inuit Association are hoping Ottawa does not grant the company an exemption to bypass the Nunavut Planning Commission. (PHOTO BY DAVID MURPHY)

Baffinland Iron Mines Corp. has proposed to bypass some serious red tape in Nunavut’s regulatory process — but two Inuit organizations are trying to stop the mining company in its tracks.

Baffinland wants to ship 12 million metric tons of iron ore to Europe for 10 months of the year as part of its Phase 2 project proposal — something the Nunavut Planning Commission, said no to last April.

Baffinland has requested an exemption to the NPC’s regulatory process that could be granted by Bernard Valcourt, the Aboriginal Affairs and Northern Development minister.

The company wants to go straight to the Nunavut Impact Review Board for environmental impact assessment hearings instead.

Hold it right there, say Inuit organizations. Nunavut Tunngavik Inc. and the Qikiqtani Inuit Association are urging Valcourt to send the whole thing back to the NPC.

Instead, they say Baffinland should continue in their efforts to get a land use amendment from the planning commission that might allow the company to break winter ice and ship ore through the winter months.

“We request that you decline BIMC’s request for an exemption, and direct your officials to work with NPC to enable it to process an amendment application on a timely and priority basis,” the joint letter to Valcourt states.

The letter, signed by both Inuit organization presidents, highlights Article 11 in the Nunavut Land Claims Agreement, which clearly states Inuit involvement in land use planning and processes is “crucial.”

“Although a ministerial exemption is a process contemplated in Article 11 of the Nunavut Agreement, it should only be used in extraordinary and compelling circumstances, or for minor variances with minimal impacts, and not to bypass either the features of approved land use plans or the normative process of land use planning,” the letter said.

“The exemption option is not the proper approach in this case given, among other things, the scale of the project, the extent and potential impacts of BIMC’s recently proposed changes.”

Both the QIA and NTI also warn that such an exemption could set a significant precedent for future development proposals in Nunavut.

“Circumventing the purpose and core functions of an Institution of Public Government like the NPC would undermine the well-designed regulatory process under the Nunavut Agreement and set a dangerous precedent,” the letter states.

Baffinland’s Phase 2 proposal would allow for more shipping out of sensitive marine areas such as Milne Inlet and Eclipse Sound in front of Pond Inlet and Sirmilik National Park. To do so in winter would mean breaking ice with potential impacts on winter harvesting and travel in the area.

That doesn’t conform to the North Baffin Regional Land Use Plan, the NPC said, and that’s why the NPC said no to the proposal.

Oceans North Canada has also urged minister Valcourt to reject the exemption. And this is the second time QIA has spoken up about stopping the exemption.