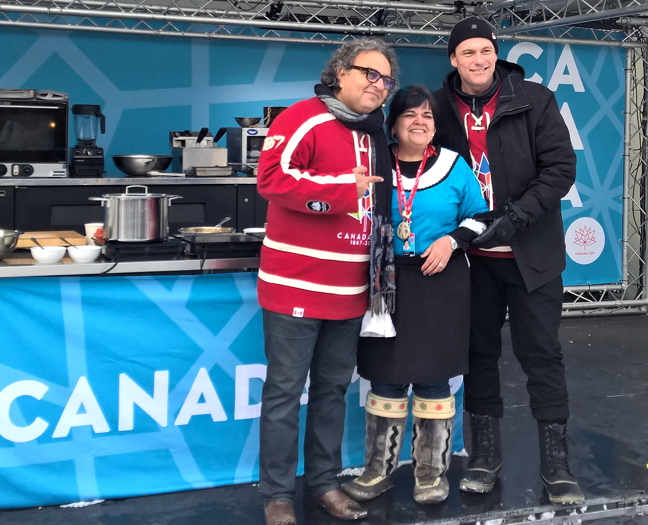 Chefs Trudy Metcalfe, Vikram Vij (left) and Chuck Hughes participate in Flavours of the North on Parliament Hill Dec. 10. Metcalfe provided food for an estimated 10,000 visitors, including a curried caribou stew that she and Vij created. (PHOTO BY COURTNEY EDGAR)

OTTAWA—Trudy Metcalfe, a renowned chef who’s originally from Nunatsiavut, was honoured this past weekend to be one of the faces of Flavours of the North, an outdoor culinary and cultural event on Parliament Hill held near the end of Ottawa’s Canada 150 celebrations.

She was asked to provide food, including curried caribou stew, for an estimated 10,000 visitors over the course of the weekend, the largest event she has ever catered for.

“People keep coming back for more and more, like they are just awed by it,” Metcalfe said.

But Metcalfe isn’t entirely new to catering large political and cultural gatherings. She was a chef for the Countdown to Nunavut celebrations in 1998, when she fed an estimated 500 Inuit living in Ottawa at the time.

With the temperature dipping well below zero Celsius and a fresh layer of snow on the ground, Metcalfe was prepared Sunday afternoon, with a sealskin coat and kamiks, to present a step-by-step cooking demonstration with Vancouver chef Vikram Vij.

They had collaborated all afternoon on creating a curried caribou stew offered as samples to the audience and served out of the Streat Gourmet food truck.

On stage, they shared cooking tips on their joint recipe, such as making sure to add the garlic and ginger near the very end.

While Vij was the supplier of spices for the curried caribou dish, Metcalfe supplied enormous quantities of caribou and arctic char. The food truck chefs prepared both the stew and spiced Arctic char chowder, while Inuit youth helped with serving.

Metcalfe saID there aren’t many Inuit chefs in Canada or in Ottawa. So she said she chooses to use catering and sharing her foods with others as a means to share her cultural heritage.

Indeed, she was the only Inuk chef at the northern foods event.

“Everyone that I have spoken to here loves Trudy and I can see that Trudy is leaving a legacy behind,” Vij said.

Many Inuit attended to show their support and taste a new twist on their country foods hard to come by in Ottawa.

“I have been to India and I have been eating with Trudy for years so it was just amazing to taste this completely world-aware food—but you can absolutely taste the caribou through it,” he said.

“It was beautiful. Just so rich and sticky.”

Rebecca Anaviapik-Soucie, a former CBC journalist from Pond Inlet, said that she was very excited to come with a friend to see this event.

“Right in the capital city? I thought, ‘This is beautiful. I am so impressed’. Caribou? Our food? In Ottawa?!”

“It is wonderful because everybody gets to try it,” said Seepoorah Allooloo, also from Pond Inlet.

But the crowd consisted mainly of curious non-Indigenous families who had never before tasted caribou or Arctic char. People in the crowd described their first taste of caribou as delicious, amazing and not at all what they were expecting.

“Some people tell their kids, ‘Oh, it is beef stew’, and like no, it is not, I am not going to pretend this. But if they do like beef stew, then they’re going to like caribou stew.”

On Saturday the event attracted just over 2,000 visitors, Metcalfe said, but a much larger crowd turned out on Sunday.

Metcalfe said she planned to share any leftovers with the Ottawa Inuit Children’s Centre, where she works as a coordinator, for their Christmas party this week.

For Anaviapik-Soucie and Allooloo, however, they said that although they really liked the stew, they did find it a little bit spicier and saltier than they are used to.

“It was wonderful though–you could smell the natural smell, the vapour,” Anaviapik-Soucie said. She explained, however, that she understood that the spices were added to appeal to a more southern audience, people who eat salt more often.

As for the char, they did not try it.

“They told us it was smoked and cooked, and we prefer 100-per-cent natural,” Anaviapik-Soucie said.

Still, they were amazed by the cultural importance of the event. “It is our natural source,” Anaviapik-Soucie said.

“And it brings awareness to the northern animals that are decreasing because of global warming,” Allooloo said.

Metcalfe laughed when she talked about how many people over the weekend asked her for the caribou stew recipe.