“Nunavutmiut don’t seem to know what it means” 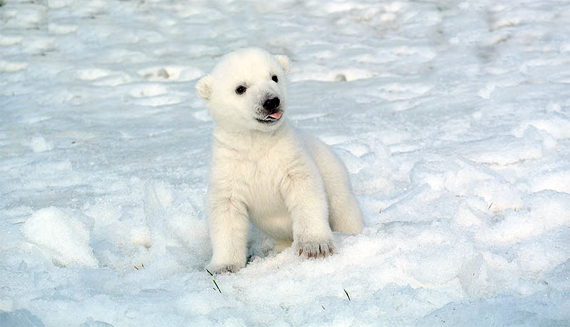 Toronto Zoo officials have suggested Searik as a possible name for its three-month-old polar bear cub, saying it means “beautiful” in the Inuit language. But many Inuit say they’ve never heard of the word. (PHOTO COURTESY OF THE TORONTO ZOO)

Photos released by the zoo in recent weeks show the cub’s little snout covered in snow as he frolics through his outdoor play area for the first time.

The 10.8-kilogram cub is growing quickly and zoo officials are now looking for a name, so they’ve reached out to the public for help.

And these are the options: Humphrey, Orson, James (from James Bay), Lorek, Stirling and Searik.

The last one, zoo officials say, is Inuit for “beautiful” — a fitting name for an Arctic creature that has captured a southern audience.

But something sounded off to Piita Irniq when he heard the name Searik. A former Commissioner of Nunavut, who also served as the Government of Nunavut’s deputy minister of culture and language, posted the Toronto Zoo’s naming contest to his Facebook page this week, asking Inuit friends where this word came from.

The response? It’s not a word – not in Inuktitut, anyway.

“I have no idea about this name,” Irniq said. “Searik is not an Inuit word and it doesn’t mean beautiful. Nunavutmiut don’t seem to know what it means.”

In a flood of responses to a post on Nunatsiaq News’ Facebook page, most Inuit say the word beautiful translates as “piujuq” or “pinniqtuq” in the Nunavut or Nunavik dialects of Inuktitut.

Searik doesn’t appear to come from Inuktitut dialects outside of Canada, either. Nuka Møller from Greenland’s Language Secretariat wondered if it could have come “from a misunderstood form of the ending –tsiaq….that we sometimes use alone?”

Commenter Becky Mearns suggested the same thing: “It is a suffix that would be added to a word to imply the beauty of a said thing,” she wrote.

A number of Nunavimmiut commented that Searik sounds similar to “sirik,” which was traditionally used as an expression of thanks before a meal.

And someone else said Searik sounded close to the word “siutuq” or heartburn in Inuktitut.

In an email from the Toronto Zoo to Nunatsiaq News, a spokeswoman said the name Searik was suggested by the zoo’s wildlife care team.

“In our research we were able to confirm the meaning was correct,” she said, referring to a Wiki Answers page.

But Piita Irniq isn’t convinced. He’s written a letter to the zoo to tell them the word isn’t recognizable in the Inuit language, although he’s yet to receive a response.

A number of other comments to Nunatsiaq News suggested the zoo instead name the cub “aputik,” which means snow; others just found it difficult to imagine an Arctic animal living in a southern setting.

The cub is the fourth addition to the Toronto Zoo’s polar bear family. The baby was born to mother Aurora and father Inukshuk last November. Both adults were orphaned as babies along a southwestern stretch of Hudson Bay, and brought to the zoo in 2002 at four months of age.

You can vote for the polar bear cub’s name here until March 3.