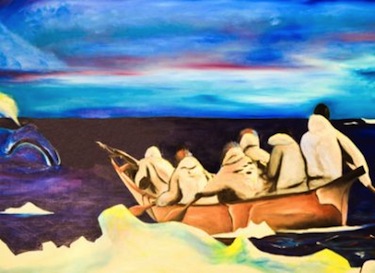 “The Patience That Leads to Success” by Wendell Brower. (IMAGE COURTESY OF THE ALASKA NATIVE ARTS FOUNDATION)

Meet Inupiat artist Wendell Brower, who comes from the North Slope community of Barrow. His work is now on display at the First Friday show during the month of June at the Alaska Native Arts Foundation in downtown Anchorage, Alaska.

The title of Brower’s show: “I have seen…”, about the artist’s Inupiat culture and what he has seen through the years.

His exhibition depicts year-round activities like whaling and the celebrations surrounding harvesting them.

“We have in our Inupiat culture a rich history from the past,” Brower said. “I want my show to portray that we [Inupiat] are still here and will be into the future.”

Brower acquired his associate degree in applied sciences and studied painting and sculpture at the University of Alaska in Anchorage.

But Brower said he was always interested in art for fun.

At an early age, he started drawing scenes from village life, in particular, snowmachines. Today, after building his skills over the years, he can now live his dream as an artist.

Brower’s Pastor, Tony Henry from Kiana, inspires him. “If it wasn’t for him, I wouldn’t be an artist,” Brower said of Henry. The two met while selling their art at the Arctic Slope Regional Corp. building in Anchorage.

“He showed me that [career]artists could be successful.”

Reproduced and adapted with permission from the Alaska Dispatch. To see the entire text of the story go here.