Questions remain about how the Oct. 27 spill occurred 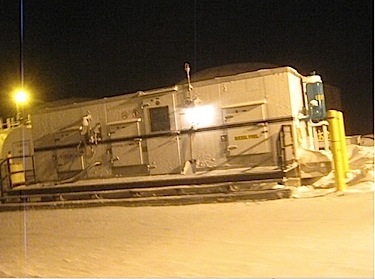 This submitted image shows the valve centre at Resolute Bay’s fuel tank farm the night of Oct. 27, when the valves of tank 104 were left open overnight. (SUBMITTED PHOTO)

One month after a leak at Resolute Bay’s tank farm, details about the source of the leak and how officials plan to deal with the spilled fuel remain unknown.

And that’s led to questions about what actually happened the night of Oct. 27.

This is when it’s alleged that someone tampered with the valves on tank 104, causing an estimated 87,000 litres of fuel to leak overnight.

Members of the RCMP detachment in Resolute Bay continue to investigate the incident, a case they hope to wrap up before Christmas.

But police won’t say if their investigation has changed focus, only that “all aspects are being looked at.”

“We’re waiting for the environmental report to see what the extent of the leakage is,” Cpl. Denis Lambe told Nunatsiaq News this week.

Police may be looking into allegations by some residents of the High Arctic community who claim there was no large-scale fuel spill the night of Oct. 27, but rather a leak of roughly 10,000 litres.

They suggest 80,000 litres of fuel actually went “missing,” while a fictitious person is being blamed for causing the leak.

Answers are expected to come from a report being prepared by engineers from the firm Stantec, who visited the community earlier this month.

But initial indications from their report show that there are in fact about 87,000 litres of fuel held by the tank farm’s berm, a rubber liner designed to catch any over flow from the tanks.

Investigators from Nunavut’s Department of Community and Government Services sent the engineers to Resolute Bay earlier this month to investigate the spill site and determine how and if a clean-up of the fuel is possible during Resolute’s dark and cold winter months.

Although the department’s environmental report won’t be complete until mid-December, CGS spokeswoman Elissa McKinnon said initial findings confirm a spill of roughly 87,000 litres and that “no gas spilled outside the tank farm’s rubber berm.”

“The berm is designed to hold anything that flows from the tanks,” McKinnon said.

That’s despite a July 2011 report prepared by a municipal inspector under Aboriginal Affairs and Northern Development Canada that found that the berm’s liner was “ripped in a number of locations.”

McKinnon acknowledged the rips, but said these would have no impact on the berm’s integrity.

“The tears in the berm are superficial,” she said. “They’re above the drainage line so they pose zero threat to the surrounding area.”

If that’s the case, that’s good news for environmental inspectors, who fear any leaked fuel could pose a threat to local wildlife as well as to the bay, which lies about 300 yards (274 metres) away from the spill site.

“At this point, we can’t see any contamination,” McKinnon said.

That won’t be clear until Stantec’s soil samples have been fully analyzed, she said.

And if the final report shows contamination, the affected areas will be cleaned up as soon as possible, she said.

But it’s not clear if and how any clean up will happen before next spring, McKinnon said, adding that the current weather conditions in Resolute Bay have hindered the investigation process.