“There is absolutely no reason why you can’t have it” 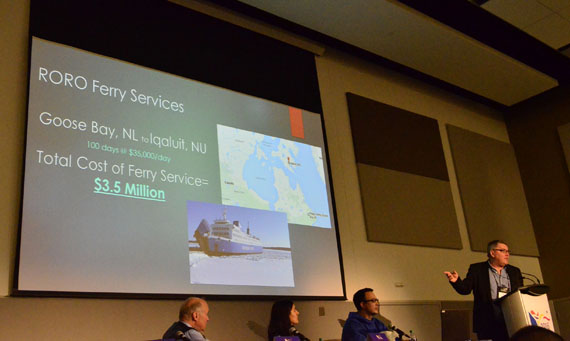 Peter Woodward, vice president of operations for the Woodward Group of Companies, describes his company’s proposal to start a vehicle ferry and dry cargo service between Iqaluit and the Port of Goose Bay, during a Jan. 27 presentation at the Northern Lights 2016 event in Ottawa. (PHOTO BY JIM BELL) 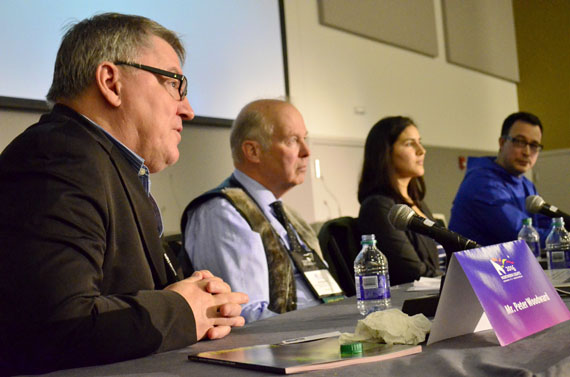 Panel members at a conference session on marine transportation held Jan. 27 at Northern Lights 2016 in Ottawa: Peter Woodward of the Woodward Group of Companies; Jim Stevens, the assistant deputy minister in charge of transportation at the Government of Nunavut; Kala Pendakur, a researcher at the Conference Board of Canada; and Victor Tootoo, the panel moderator. (PHOTO BY JIM BELL)

OTTAWA — Imagine taking your truck aboard a ferry docked at Iqaluit that carries you all the way to the Port of Goose Bay.

That’s the vision that Peter Woodward of the Woodward Group of Companies laid out Jan. 27 at a presentation he gave at the Northern Lights 2016 event in Ottawa.

“This could be what I call a paradigm shift,” Woodward said in his pitch for an Iqaluit-Goose Bay dry cargo service that would start up as soon as Iqaluit’s deep sea port is completed in 2020.

The Woodward group is a family firm, founded in the early 1960s, whose companies, based out of Happy Valley-Goose Bay, do fuel distribution, marine transportation, trucking, aviation and auto sales throughout Labrador, Newfoundland and the eastern Arctic.

In 2002, the Woodward group took the Government of Nunavut’s petroleum products distribution contract away from Northern Transportation Co. Ltd. after outbidding NTCL by a wide margin.

The Woodward group, which in past years has acted as an agent for Esso and Imperial Oil fuel products in Resolute Bay, Iqaluit, and Churchill, has made no secret of its desire to launch a dry cargo and ferry service between Iqaluit and the Port of Goose Bay.

But now that the governments of Canada and Nunavut have confirmed they’ll fund construction of a deep sea port at Iqaluit, the ferry service could start in 2020, when the Iqaluit port is scheduled to open.

“There is absolutely no reason why you can’t have it,” Woodward said.

He said the Iqaluit-Goose Bay ferry and cargo service would run for about 100 days of the year, and cost about $3.5 million a year to operate.

They would serve the route with a roll-on, roll-off, or “roro” service — which means a vessel that allows vehicles to drive on and off from a dock.

And Woodward reminded his listeners that Happy Valley-Goose Bay is now connected to the rest of Canada by the Trans Labrador Highway.

That recently completed road runs from Happy Valley-Goose Bay through Churchill Falls and Labrador City, and connects with the Quebec highway system near Baie-Comeau.

Its completion means Happy Valley-Goose Bay can now be supplied by tractor-trailer transport trucks from Ontario and Quebec.

Woodward said that makes the community a low-cost source of goods for Iqaluit.

“If you build it right, it could make a huge difference to people’s lives,” Woodward said.

Jim Stevens, the GN’s assistant deputy minister in charge of its transportation unit, said the GN would likely submit its Iqaluit port proposal to the Nunavut Impact Review Board by the end of this year.

That assumes the legislative assembly approves a supplementary appropriation of $21.2 million at its upcoming sitting, which starts near the end of the month.

Ottawa’s contribution of $63.7 million has already been confirmed, Stevens said.

Construction would likely start in 2017 and the Iqaluit port would open in 2020, Stevens said.

A $40-million small craft harbour at Pond Inlet, capable of accommodating 100 to 150 small vessels, similar in design to an existing facility in Pangnirtung, would likely be completed also in 2020, Stevens said.

“We’ve got year-round vehicle traffic now and we have highways now, way ahead of what there used to be at one time and we’ve got tractor-trailer traffic coming in from Ontario over the Trans Labrador Highway,” Peyton said.

“So what it means for us is we would probably have an opportunity to provide some of that product that need to be distributed up in the North.”