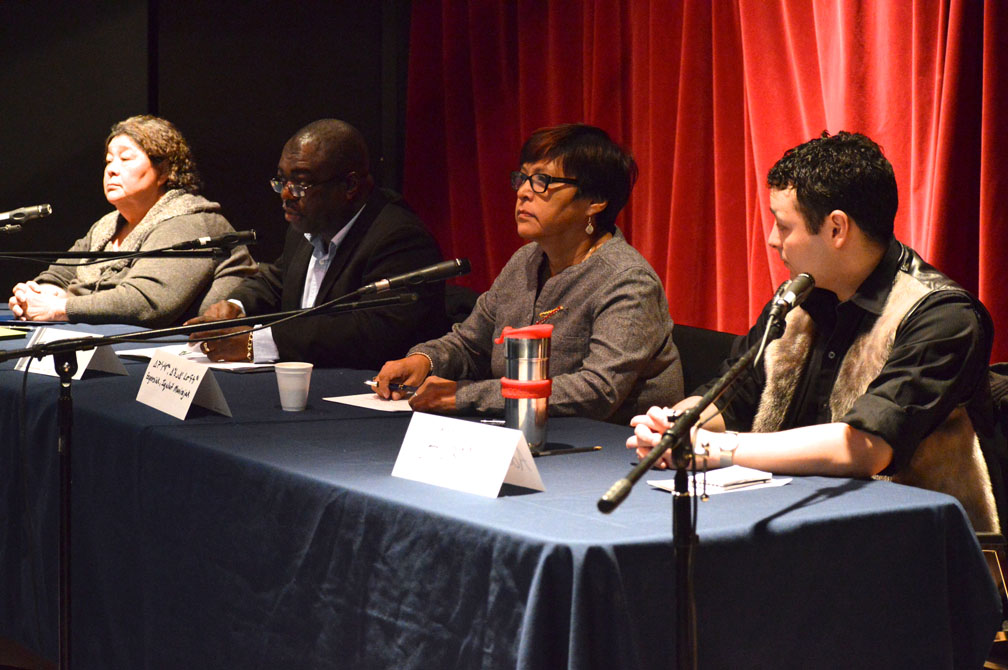 The candidates in Iqaluit-Manirajak held a cordial discussion Oct. 25 at the start of a marathon eight-hour candidates forum at the francophone centre.

The riding’s candidates are Monica Ell-Kanayuk, the incumbent MLA and deputy premier; Okalik Eegeesiak, the international chair of the Inuit Circumpolar Council; Jude Lewis, a dentist; and Adam Arreak Lightstone, a financial analyst with the Government of Nunavut.

Candidates were given five minutes to pitch their campaigns before fielding questions, drawn at random and read by organizers. Candidates were allowed to respond in their language of choice, but since no live interpretation was available, some candidates answered in both Inuktitut and English.

On the adoption of children, each candidate was careful to support both forms of adoption practiced in Nunavut: formal legal adoption and Inuit custom adoption.

But each agreed on the need for more scrutiny to ensure that children placed through custom adoptions are given to responsible parents and provided access to their Inuit heritage.

“Certain families have adopted children and live in the States and Australia,” said Ell-Kanayuk, who added, “It’s important that [Inuit] children still know who they are.”

The candidates also called for increased awareness of mental health issues within the territory, including an overhaul of nursing and other training programs available at Nunavut Arctic College.

Eegeesiak also said people in the communities who don’t have paper qualifications could be used as counsellors.

“We have people at the community level right now to address mental health services,” Eegeesiak said, but there are no ways for them to receive accreditation.

“So far Arctic College has put forward law programs, but no social service programs,” he said.

On education, the candidates seemed to agree that social promotion is a major contributor to the territory’s high dropout rate.

Lightstone said the issue could only be addressed through amendments to Nunavut’s Education Act, but acknowledged the pressure that groups mounted against Bill 37, which MLAs refused to debate during the last assembly.

A government-financed breakfast program for all Nunavut schools will better prepare disadvantaged youths to succeed, he said.

For Nutrition North Canada, candidates said the federal government needs to conduct a review of the program from the ground up, but some solutions to high food costs may be solved through Nunavut-specific transport initiatives.

Ell-Kanayuk admitted that a road system between Baffin communities is not an option “in the near future,” but that similar projects in the Kivalliq and Kitikmeot are feasible if multiple levels of government work on the issue together.

Lightstone suggested upgrading Nunavut airports to allow for airships, which potentially have lower operating costs and may help reduce the price of food.

After the session with the Iqaluit-Manirajak candidates had finished, candidates from the other three Iqaluit electoral districts filed into the francopone centre for three more debates that lasted all day.